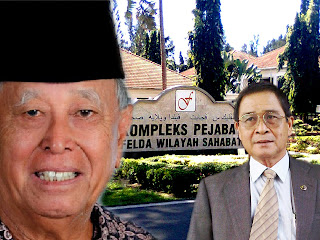 UPKO Nasional Deputy President Datuk Wilfred Mojilip Bumburing in statement urge the Sabah State Government to protect the interest of local settlers now in the Umas and Dent Peninsula FELDA Schemes saying any move by FELDA and the Federal government which might affect lands under both the Felda schemes and the local settlers must be avoided at all cost.

“I fully support the statement by former Chief Minister Datuk Harris Salleh on the need to protect the interest of local settlers in the Umas and Dent Peninsula FELDA Schemes. Personally I know the background of the entry of FELDA into Sabah as the planning stage was started during the Berjaya era and implemented while PBS was at the helm of the Sabah State Government.

"I was involved in locating and interviewing potential settlers from various villages around the States and subsequently moving them to be re-settled at both the FELDA schemes. The negotiations of which I was involved pertains to number of acreages that FELDA would be allowed to develop and implement a settlement scheme and which was agreed by the State Government at that time.

“I urge the State government to stop FELDA from corporatizing or privatizing any FELDA settlement schemes in Sabah for the sake of the settlers and also the State Government.

“Along this line, I was informed that FELDA might have developed areas larger than was stipulated in the original agreement. As such, I asked that the FELDA management reveals to us the actual acreages that they have develop so far as if what was informed to me is true than FELDA is reaping more money and profits from outside the allotted areas given to them.

"Also, if that was so, I urge the State Government to take every steps in order to reclaim those areas that might have been encroached by FELDA and give them to landless bonafide Sabahans.

“On another note, I am much disturbed to learn that income earned by other settlers in Semenanjung are still being deducted although they have already paid in full the initial development expenses which they need to reimburse FELDA. I am made to understand that these deduction was for the purpose of replanting expenditures.

"As far as I was informed, the deduction of income from oil palm produce would stop once the development expenses were paid in full and any expenditures incurred during replanting exercise would be borne by the settlers themselves. In this case, should any of the settlers decide to carry out replanting on their lot, FELDA must actually utilized the funds which they have deducted from the income of the settlers.

“I am also questioning the employment policy of FELDA as I was told, even lorry drivers were imported from Semenanjung. I want FELDA to also inform the public on the employment and recruitment structure as FELDA being a Federal agency must also abide by the Borneonisation process as outlined in the 20-points agreement and the Malaysia Agreement.

"Being a part of the party that put those settlers in the FELDA Schemes, I have the locus standi and the right to voice out this issues and urge the State Government to do everything in their power to retain those lands under the settlers’ control and to issue them with Land Titles.” Datuk Wilfred Bumburing.