ANOTHER GRAVEYARD FOR SABAH? 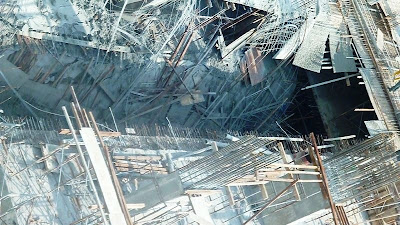 "Why has DOSH allowed workers to continue to work on the collapsed site without investigation? That was TOTAL disregards to the safety of the workers," Junz claimed.

The collapsed photo was taken on 28 August by a concerning citizen and by 3 Sept (photo taken) the form work was ready to be installed for the new concrete floor slab. That was against good practice because public safety should be first priority.

DOSH has earlier explained it was due to design failure that they have re-constructed the site.

Junz said if  it was indeed due to design failure, immediate investigation may need to be carried out to find out the nature and extent of the failure affecting the whole building for PUBLIC concerns and safety reasons.

"Design failure in a building has a more serious implication than any accidental collapse. To what extent or percentage is the building affected by the design failure?" Junz asked.

This concerns not just the purchasers and public safety. It also affects Tourism industry and 2nd home foreign investors. Imagine what would be the impact to our industries when we have another high land tower collapse issue?

Junz proposed immediate investigation be carried out by an INDEPENDENT government body to find out the real cause of the alleged collapse and to prevent loss of lives in case of another collapse.

"It's the moral responsibility and legal obligation of a 'people-centric' government to show the society that they are transparent in any respond which concerns public concerns and safety issues," Junz concluded.