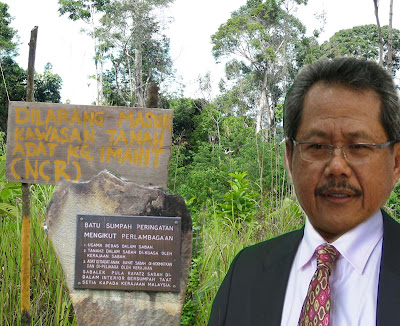 KOTA KINABALU: Claims of customary land beyond the 1930 Land Ordinance will not be included under Native Customary Rights (NCR) but opened and treated as new land applications.

Land and Survey Department Director Datuk Osman Jamal said the limit of the NCR claim has been effected by Section 5, 6(1) and 88 of the Sabah Land Ordinance (SLO), whose meaning many parties have wrongly defined.

"In these three sections beginning December 13, 1930, Government land and reserves in this State will be handed its full rights to the government.

With this, any illegal settlement on government land (despite how long the tenure was) or settlement with temporary stay authorisation could not make any claim, grant, importance or shape any rights to demand ownership on the land from the government.

"Rights, grant interest or business on the land will only be legitimate after it is registered in line with this Ordinance, except for ownership of lands that are still under the native customary rights for generations," he said.

However, he added, the department would still receive claims and consider customary land based on a seven-tier method of definition. These are:

- Legitimate ownership of settlement or cultivation for three years in a row;

- Land planted with fruits with more than 50 and above in a hectare;

- Unplanned cultivation of fruits, sago, rattan and any plants which have economic value and is proven that its produce are treated as a personal belonging of the natives;

- Land that has been cultivated and developed in a three year period;

- Religious and graveyard areas; and

- Pathway made for humans and animals from rivers, roads, houses.

"Under Section 14 of the SLO, the natives can make claims in writing.

The officers in the Collector of Land Revenue Office can open an investigation docket and insert all the documents containing strong proof and forward it to the Land and Survey Office for a land hearing," he said, during a media dialogue here.

He added even with the application and strong proof it could still be rejected but that natives could still forward and appeal to him within 30 days along with a RM50 fee.

Furthermore, his decision could also be appealed through the High Court level, Court of Appeal and later to the Federal Court.

This however, will take a long process compared to the application of communal titles which takes six months to a year.

He said the application is not as complicated as NCR claims and it was made to protect the lands from being sold to outsiders.

Earlier Osman stated that the progress of regulations on NCR took 41 years from 1889 until 1930 and have seen five amendments.