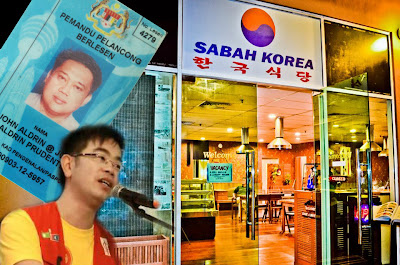 DAP Sabah welcomed Tourism Minister Dato Masidi announcement that every opportunity would be made available for 'Sit-In' local tour guides to learn Korean language to cater for Korean tour in Sabah.

DAP Sabah assistant secretary Junz Wong said Dato Masidi however may have been ill-advised as far as the past Korean language courses for local guides was concerned.

Article in newspaper reported that "Masidi said although an offer had been made in the past by the government for locals to get free Korean language tuition classes, the response was negligible"

Junz said according to his findings, there were altogether 19 Sabah tour guides who had enrolled for the Korean language classes 4 years ago.

"All of them passed the training course and eight of them applied for the licenses.

However the irony is till today, NONE of the 8 Korea-speaking local guides was ever employed by any Korea agency companies to cater for any Korea tour in Sabah before, for the last 4 years!" Junz claimed.

The argument of local guides was not that Korean was a difficult language. They argued that what was the point to pick up Korean language when they knew they would never been employed to cater Korean tour?

So the question now is WHY Federal Tourism Minister - Ng Yen Yen has claimed that there was not enough Korea speaking local guides to cater Korea tour? Was she trying to mislead Sabahans? Junz asked.

Ng Yen Yen has said that until Sabah tourism has proven that there were enough Korea-speaking guides to cater Korea Tour, she had no choice but to liberalize the 'market'!

Junz rubbished her claims saying "What's the point of our local Sabahan tour guides learning Korea languages knowing that they would never be employed?!"