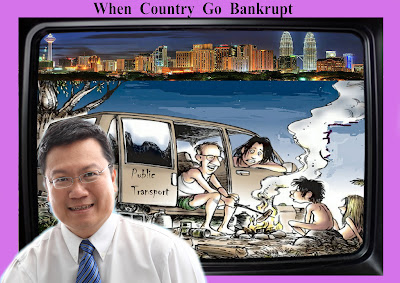 THE FAILURE of the BN Government in providing adequate public transport system in the state and country has resulted in more and more young Malaysians to fall into debt and eventually become bankrupt.

As a result of poor public transport system in the country, cars are widely viewed as necessity rather than a luxury. This resulted in more and more of Malaysians resorted to take out hefty car loans which directly takes out a chunk of the average house hold income. The average household debt is currently at 76% of their monthly income.

Currently the excise duties of 75% to 105% are imposed on passenger cars. The excise are passed on to end consumers who ends up paying inflated prices for cars unlike those in the region. For eg- a 1.5 litre Toyota Vios with full specifications retails at RM89,000 in Malaysia where in Thailand it costs around RM64,000.

This is the result of the years of local automotive players have enjoyed a very cosy existence- across the supply chain, car companies to end financier who have enjoyed fat margins and keeping the car prices at unreasonable prices.

Insolvency Department has handled 241,740 bankruptcy cases until April this year and the bulk of them were due to vehicle hire purchases.They were 116,379 bankruptcies since 2005, with 29, 338 (25 per cent) comprising those who defaulted on car loans. Other causes of bankruptcy include personal loans (13 per cent), housing (12), business (11) corporate loans (five), credit card debts (five), income tax debts (one) and student loans.

The staggering number was revealed by BN Minister himself in Parliament in the Prime Minister's Department Datuk Seri Nazri Aziz during the question and answers session in one of the Parliament sittings.

Therefore , this is the very reason why Pakatan Rakyat is committed to reduce car prices by tendering out APs (Approved Permits) to the public rather than handling out to certain quarters and cronies. In addition to that, PR is committed to slash down excise duties on cars. Such measures from Pakatan Rakyat has been supported by various automotive association groups in the country- Dr Roland Chia added.
Posted by sabahkini.net at 12:34