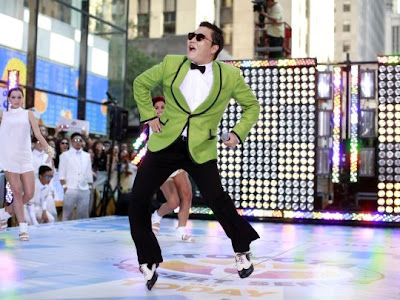 SEOUL : A pop star whose song “Gangnam Style” became the first Korean hit to top Apple’s music download charts has also worked his magic on his father’s software firm, helping it double in value since singer and dancer Psy burst onto the global scene in July.

Psy’s father, Park Won-ho, is the chairman and controlling shareholder of South Korean semiconductor company D I Corp and its market capitalisation has surged to 113.5 billion won (RM313 million) on the main Seoul bourse, making it as of today the 459th most valuable stock measured by size.

Psy’s “Gangnam Style”, which mocks the rampant consumerism of a rich Seoul suburb, went viral on video-sharing website YouTube. The video has been viewed more than 267 million times on YouTube since it was released in mid-July.

“The positive sentiment from ‘Gangnam Style’ has attracted investors just because of the fact that the company is owned by Psy’s father and uncle,” said Lee Sun-tae, a researcher at NH Investment and Securities, who added Psy is not a shareholder in the company.

“The popularity will slowly dissolve in time, naturally.”

Software millionaire Ahn Cheol-soo, who this month announced he would run for the country’s presidency, saw the value of his company Ahnlab Inc’s shares slide after his bid.

Ahnlab stock was down 30 per cent today compared with its closing level a week ago, just a day before he made his announcement.
Posted by sabahkini.net at 23:52