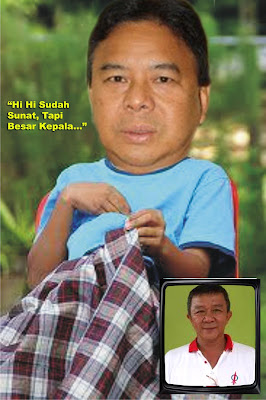 KOTA KINABALU: Dewan Rakyat Speaker Tan Sri Pandikar Amin Mulia should not keep the public, especially in Labuan, guessing over the status of Labuan Member of Parliament Datuk Yussof Mahal who had been declared a bankrupt by the Labuan High Court on August 7th but still goes about his duties.

DAP Chief on the Island, Lau Seng Kiat, said Pandikar had been notified by the Insolvency Department on the bankruptcy status of the MP.

He said he would decide whether to allow Yussof attend the Dewan Rakyat sitting beginning on September 24th to November 27th.

Lau noted that the budget session had begun but the Speaker had yet to make a decision and this was unusual. He said Labuan folks wondered whether the island still had an elected representative in the House.

Lau said: "The Speaker should not delay his decision as the matter was urgent and of public interest, after all it was not a difficult decision to make since the Federal Constitution very clear on the matter.

Under Article 48 of the Federal Constitution it was stated clearly that a person is disqualified from being a member of either house of parliament if he is an undischarged bankrupt.

He said the MP, by his own admission, had stated that he was still resolving his bankruptcy issue.

Making further reference to the bankruptcy laws, Lau cited Part II Disqualifications and Disabilities of bankrupts under the Bankruptcy Act 1967. He said under this law where a debtor is adjudged bankrupt he shall be disqualified for being nominated or elected to holding or exercising the office of Councillor of a local authority.

Such disqualification shall be removed and cease if and when the adjudication of bankruptcy against him is annulled or he obtains from the court his discharge with a certificate to the effect that his bankruptcy was caused by misfortune without misconduct on his part.

The court may grant or withhold such certificate as it thinks fit. Lau hoped there would be no "double-standards." He said he was quite sure that if the bankruptcy issue involved an opposition MP the MP would had been expeditiously disqualified.

Lau also regretted the decision of the Minister of Federal Territories and Urban Wellbeing for having no initiative to decide on the post of Yussof as Chairman of Labuan Corporation and that the Minister depend on the Speaker's decision before making his own.

Lau said that the Minister had erred in the matter because the Speaker's decision was on a separate subject and not linked to Yussof post as Chairman. Lau said the Labuan Corporation had its own laws on this and referred to Perbadanan Labuan Act 2001 Act 609 under First Schedule (Subsection 5(5)). Lau said that under the section the office of member of Perbadanan is vacated if he becomes a bankrupt.

Lau said that he was not a legal expert but he was sure that the experts would know whether by impeding the process of law there was Contempt of Court.

In the meantime the MP seem to be going about his business as usual here officiating function.

The last one he officiated was a seminar of Improving Financial Integrity organised by the MACC.

He said the MP Song Swee Guan was declared a bankrupt on May 8th 2003 by the Kuching High Court for failing to settle a RM300,000 debts to businessman.

The MP without creating any fuss resigned from his seat. However there was no general elections held as this was due next year.