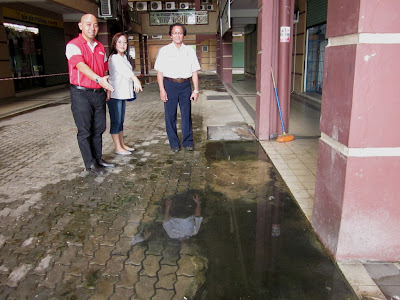 THE SEWERAGE problem never seem to have an ending and this as evidenced when the Sabah DAP Wanita Chief, Puan Noriah Onong visited Putatan Point. The sewerage system behind several shops there is giving the shop owners an uncomfortable smell coming from the sewerage that overflows to the surface.

According to one of the shop owner, complaints has been brought up to the Putatan Council but todate no action has been taken by them. He questions why the Council is not taking their predicament seriously and this has affected their business and customers are shying away especially the eateries shops there.

The problems could have arises due to the blockage in the sewerage system. And the Council need to address this problem as Sabah DAP KK MP office also received complaints from other Putatan residents pertaining to blockage sewerage system in their residential area. This has caused their toilet to be overflowed especially when it rains.

KK MP office will forward the complaints to Putatan Council and will ensure that this matters will be looked into so as not to burden the shop owners and Putatan residents who are also paying for their house assessment.
Posted by sabahkini.net at 15:50