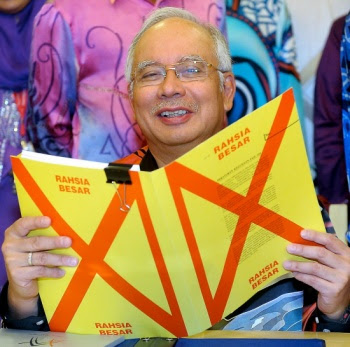 PUTRAJAYA: The Budget 2013 to be tabled by Prime Minister Najib Tun Razak tomorrow is expected to see a continuation of affirmative policies he had introduced since three years ago to further enhance the quality of life of Malaysians, say officials familiar with its formulation.

To ensure sustainable growth and social progress besides exercising prudent financial management, the budget will be “mildly expansionary but fiscally responsible”, they said.

Federal government expenditure in 2012 is estimated at RM229 billion and this means that next year’s spending will be slightly higher to cater for various comprehensive programmes aimed at enhancing the well-being of the people in a number of areas.

The officials stressed that while some people may be prone to labelling the budget as an “election budget” in view of its people-centric programmes and timing as the next general election is expected between now and June next year, one should not forget that improving the livelihood of the people has been the clarion call of Najib since he took office in April 2009.

The budget, they emphasised, would be in line with his much-acclaimed principle of “People First, Performance Now”, which would take into account the aspirations of the people for a better life and laying the foundations towards a high-income and developed economy by 2020.

In Budget 2012 announced last year, Najib, who is also the Finance Minister, chose the theme: “National Transformation Policy: Welfare for the Rakyat, Well-Being of the Nation.”

In other words, the Budget 2013′s philosophy goes beyond the general election.

Instead, it is geared towards putting in place various initiatives for the well-being of the people on several fronts like easing the cost of living, improving healthcare, developing human capital and expanding basic infrastructure in under-developed areas, especially Sabah and Sarawak.

In a departure from the norm, the officials said that Najib, being a game-changer in the country’s political and economic transformation, would ensure that Budget 2013 addressed the concerns of the tax-paying urban middle-class, whose monthly incomes ranged from RM5,000 to RM10,000.

There have been a lot of debate that the previous national budgets had been heavily-skewed towards the rural poor and that middle-class urbanites had often been neglected.

That aside, the well-being of the entire community – rural folks, women, young people, civil servants and businesses – will also be addressed to move the country forward as well as provide a cushion against an uncertain external environment, especially the turbulence emanating from Europe, next year.

This will mean a continuation of policies to further stimulate the domestic economy, which has seen fairly robust growth this year, especially in the construction, manufacturing and services sectors.

The implementation of several Entry Point Projects (EPPs) under the National Key Economic Areas (NKEAs) has also given much impetus to the local economy.

This is especially evident by the robust private sector investment besides the expansion of the local capital market through the success of high-profile initial public offerings (IPOs) like Felda Global Ventures Holdings Bhd and IHH Healthcare Bhd, the improved market capitalisation of Bursa Malaysia and the increasing attractiveness of Islamic finance in the global financial market.

Given the success of the local capital market and the significant role undertaken by Malaysia in the issuance of sukuk bonds, the government is expected to intensify incentives for the capital market as an enabler of economic growth.

On the issue of prudent financial management, the officials said the governmment remained committed towards further lowering the fiscal deficit to around 4.0% in 2013 from 4.5% in 2012 and to 3.0% by 2015.

Asked how this would be executed despite the budget being mildly expansionary, they explained that it would be done through better financial management, including reducing wastage and channelling subsidies to the right target groups instead of blanket subsidies.

They said reducing the deficit would not be a problem as long as the local economy thrived and remained resilient against the adversities of a harsh external environment.

Asked whether the question of lower excise duties for motor vehicles would be addressed in Budget 2013, they said Najib’s budget speech should point towards a review of the country’s automobile industry, where the livelihoods of more than 500,000 people connected with the industry were at stake besides looking at the resurgence of the national car companies. (Bernama)
Posted by sabahkini.net at 12:09