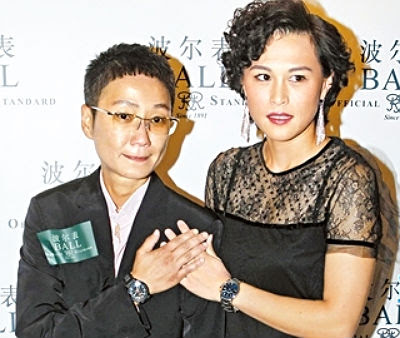 MARRIAGE.....Sean and Gigi pose for photos after going public with their marriage.

HONG KONG tycoon Cecil Chao Sze-tsung is offering a HK$500 million (RM200 million) reward to any man who can be a decent husband for his 33-year-old lesbian daughter, Gigi, after she apparently married her girlfriend of seven years in Paris last April.

According to reports in the Chinese media, the 76-year-old—an investor of the Cecil Chao Centre in KL, the executive chairman of Cheuk Nang Holdings, and the son of shipping magnate TY Chao—refuses to acknowledge his new daughter-in-law Sean, whose parents are the Asian agents for the luxury brand Ball Watch.

Last Thursday, Gigi and Sean, who started dating in 2005, revealed that they had a French wedding in the spring, exchanging vows in front of a priest. But on Monday, an angry father-of-the-bride issued a press statement insisting that Gigi was still single and straight. 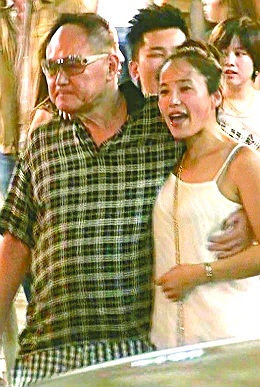 In a letter to Apple Daily, Cecil wrote: "Regarding the reports that were published on 22nd September about my daughter Gigi's marriage, I'm rectifying here that she has not gotten married to anyone. Please clarify."

In a telephone interview, Cecil described the wedding news as "ridiculous and untrue", adding: "I don't know of such an incident. No such thing."

He also said he had never met Sean. "Gigi can befriend anyone but don't make the relationship so complicated. Her social circle is very vast. She has a lot of friends," he told the press.

He asked the media to help him find a good son-in-law by introducing some nice guys to his daughter. "You help me find one. Put it in the newspapers. I will give out HK$500 million [to him]. I will also have a big reward for you." When probed about who would be husband material for Gigi, Cecil said anyone is fine as long as she likes him.

Gigi, who is the executive director of Cheuk Nang Holdings, has since backed away from talking to the press so as not to anger her old man any further. "Obviously the elderly are not happy over this. We respect their views. I've nothing to say for now," she told Apple Daily.

Gigi is Cecil's daughter with his ex-wife, actress Kelly Yiu Wei, and he has two sons from other partners. Despite his success as a businessman, Cecil is better known for his playboy lifestyle.

In an interview he gave several years ago, he claimed to have had 10,000 girlfriends of various nationalities. "If Forbes chooses the world's happiest person, it must be me," he said. Cecil is currently dating a 30-year-old Chinese national known only as Lena. (Apple Daily)