ANOTHER VIEWPOINT FOR YOU, AMBIGA (OP-ED) 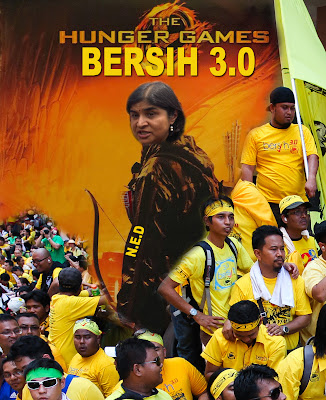 AN ARTICLED published in the New Straits Times newspaper exposing several Malaysian NGOs receiving foreign funding has triggered a storm of controversy over the validity of such accusations. NGOs including Suaram, the Coalition for Free and Fair Elections (Bersih), the Centre for Independent Journalism, and others threatened the newspaper with legal action unless it issues an official apology within 48 hours.

Despite numerous critics casting doubt over these accusations, prominent figures such as Bersih leader Ambiga Sreenevasan have admitted to the press that her organization receives foreign funding.

The Malaysian Insider reported in their June 2011 article “Bersih repudiates foreign Christian funding claim,” that “Ambiga admitted to Bersih receiving some money from two US organizations — the National Democratic Institute (NDI) and Open Society Institute (OSI) — for other projects, which she stressed were unrelated to the July 9 march.”

While many perceive this story to be a “crackdown on civil society” and a means to “distract public attention from serious issues” prior to the general elections, a closer examination of these organizations is necessary.

The National Democratic Institute (NDI) is satellite organization of the National Endowment for Democracy (NED), which receives its funding almost entirely through the United States Government.

As NED hides behind tired euphemisms of “promoting democracy” and “fortifying civil society” around the world, the organization has been accused of manipulating elections and bolstering dissident organizations in an attempt to topple governments in Nicaragua, Albania, Venezuela, Russia, and elsewhere. Government-funded organizations like NED, and others such as Freedom House and the International Republic Institute, exist to further American foreign policy in the countries where Washington has strategic interests.

The United States has begun shifting its focus to the Asia Pacific region in recent times, which many believe is a means to counter China’s growing influence. Opposition leader Anwar Ibrahim maintains close ties with senior American officials and was even a panelist at NED’s "Democracy Award" event held in Washington D.C. in 2007.

Despite Prime Minister Najib’s efforts to make his administration more attractive for US investment and partnership, Washington views Anwar Ibrahim as a more malleable candidate who would ultimately prove to be more adept toward serving their interests.

Despite claims of being “non-partisan” organizations like Bersih and Suaram receive funding to cast doubt on the political status quo and to promote dissent. A simple visit to NED’s official website confirms that the organization has indeed provided funding to Malaysian groups, and has supported media which would be considered “pro-opposition.”

NED annually provides RM 317,260 for news website Malaysiakini – an organization that was founded with a $100,000 grant from George Soros’ Open Society Foundations and other groups.

NED provides RM 285,516 to Suaram, and an astounding RM 2,544,670 to the International Republic Institute, who claims to be working with “state leaders in Penang and Selangor to provide them with public opinion research, training and other resources to enable them to be more effective representatives of their constituents” – specific mention of these states is unsurprising.

Few “activists” consider the broader implications of these affiliations – and have instead opted to advertise their own impressionability by following NGOs bent on convincing them how “unfree” their country is.

Democracy activists are under the impression that their country imposes repressive controls on expression – can one not go into a bookstore to freely purchase titles such as “The End of Barisan Nasional?” – written by Suaram founder Kua Kia Soong?

According to Ambiga Sreenevasan, the electoral process is so unfree that a mass movement like Bersih is required to purge the system of its backwardness – in a country where the opposition controls four states.

In an interview with Julian Assange of Wikileaks, Anwar Ibrahim called Myanmar (Burma) more of a democracy than Malaysia. Is it not outrageous that an organization calling itself the “Centre for Independent Journalism” lashes out against a local journalist for exercising her freedom of speech by publishing a product of her research? Cinematic exaggeration and hysterical claims of being “unfree” - this is what “democracy promotion” looks like.

Six NGOs have demanded an apology from the New Straits Times, all of which receive funding from groups funded by the US State Department or the Open Society Institute.

Realistically, complex issues of American foreign policy and political destabilization cannot be adequately summarized in the space of an average print media article. This ordeal should be a valuable lesson for truth-seeking Malaysians to independently research topics of interest before forming personal conclusions (including the figures and claims made in this article).

As the accused NGOs claim to represent “transparency,” “freedom,” and “independent journalism,” their own illegitimacy is laid bare as they attack the work of a local journalist who attempted to expose a money trail that leads straight to the American Embassy.

(NOTE : Nile Bowie is a Kuala Lumpur-based American writer and photographer for the Centre for Research on Globalization in Montreal, Canada. He explores issues of terrorism, economics and geopolitics.)