NO TAX ON SMOKES WILL COST NAJIB VOTES’ 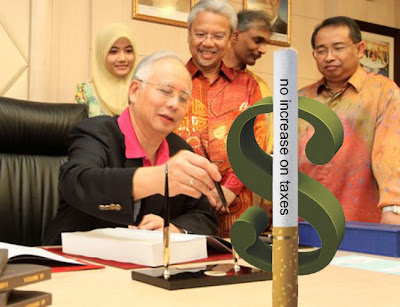 DISAPPOINTED.... Big tobacco companies disappointed with the government for not increasing cigarette prices.

PETALING JAYA: The absence of an increase taxes on cigarettes in the 2013 Budget may cause a portion of Barisan Nasional’s votes to go up in smoke, according to Malaysian Council for Tobacco Control secretary-general, Shaari Ahmad Junid.

“He is not getting my vote. Rest assured, I will get as many of my friends to not vote for him as well,” Shaari told FMT.

For the second time since last year’s budget, Najib has chosen not to touch the so-called sin taxes of tobacco and alcohol, despite the two being traditionally an item in past budgets.

And Najib’s decision has riled up Shaari, whose organisation has been lobbying for an increase in taxes on tobacco by at least 100%, and had recently sent the government a petition on the matter.

“I’m very disappointed. He didn’t even mention it. He had a chance to do it, but he didn’t. What is Janji Ditepati (Promise fulfilled) if you sign the the WHO’s Framework Convention on Tobacco Control and don’t follow it up?

“Najib talked about ‘enhancing the well being of the rakyat’, but how can you call it a budget about sejahtera (well being)?”

“He also mentioned about building more 1Malaysia clinics, but he must know the saying ‘prevention is better than cure’.

“Rather than having more clinics, I’m not saying don’t build them, he must also think about stopping people from getting sick,” he said.

He added that a recent published study also indicated how tobacco can drain a lot in the health budget.

He also argued that increasing taxes would not cost the tobacco industry huge losses as their profit margin was high.