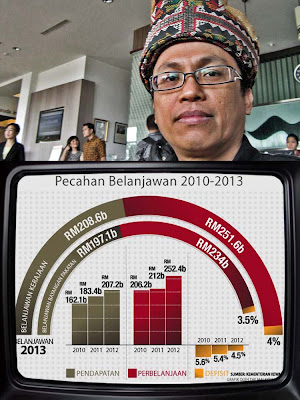 KOTA KINABALU: Sabah political and social activist Kanul Gindol said Prime Minister Datuk Seri Najib Tun Razak has delivered the Budget 2013 as the best pro-people budget ever under just the right circumstances with the general election looming around the corner.

“This expansionary budget would benefit more Malaysian citizens. Besides huge funds for physical developments and human resource as usual, Najib has also targeted the low-pay citizens for goodies.

“It is election time, and the cash give-out under BR1M 2.0  in January speaks volumes of that political will of the ruling party to retain its popularity ahead of the general election which is due by April,” Kanul said in a statement, here, yesterday.

Kanul, 46, chairman of Gindol Initiative for Civil Society Borneo and secretary-general of United Sabah Tindal Organisation (Usto) said with the solid federal financial standing, Najib’s government could give out the one-and-a half month bonus to all civil servants.

“Najib looks set to deliver more if his party is retained as he is a leader with a very strong will to lead,” Kanul said.

Tabling the 2013 Budget in the Dewan Rakyat in Kuala Lumpur, yesterday, Najib, who is also Finance Minister, announced perks to boost investments designed to further advance the Economic Transformation Programme (ETP) and achieve the objectives of Malaysia becoming a high-income nation.

Meanwhile, David N. Matta, a civil servant from Sandakan, said the one-and-a-half month bonus for civil servants showed the willingness of the government to allocate substantial funds for the benefit of civil servants, especially those low and middle income earners.

“As a civil servant, most of us have been waiting for the housing allowance to be increased to RM450 from RM180 as demanded by Congress of Unions of Employees in the Public Service (QUEPACS).

“Unfortunately, our Prime Minister did not have that in the budget and we are still hoping for action to be action taken on that,” he said.

David also welcomed the government’s initiative to narrow the development gap between East and West Malaysia.

“As a Sabahan, I welcome the initiative based on our contribution to our economic growth, we deserve the same infrastructure and development especially roads,” he said. (BP)