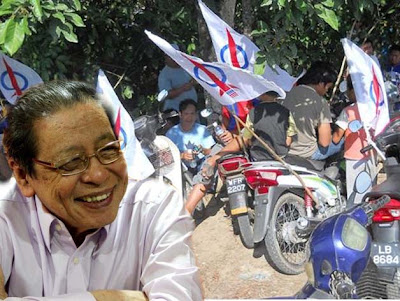 PLEDGE.....The Pakatan 2013 Budget is also a pledge for a New Deal for Sabah and Sarawak, comprising five elements.

The Pakatan Rakyat’s 2013 Budget recognises and addresses the three “Cs” of corruption, crime and competitiveness – the trio of problems which are the bane of the Malaysian economy.

If unresolved, will condemn the country to  mediocrity and even towards the direction of  a failed state. The Pakatan 2013 Budget is also a pledge for a New Deal for Sabah and Sarawak, comprising five elements:

Reaffirmation of the Kuching Declaration of Pakatan Rakyat of Sept 16, 2012 to fulfil the hopes and aspirations of the people of Sabah and Sarawak in terms of infrastructure development and protection of their fundamental rights in forming Malaysia 49 years ago in 1963;

Pakatan Rakyat pledge to honour the increase of petroleum royalty to Sabah and Sarawak (as well as to Terengganu and Kelantan, the other  oil producing states) from 5 to 20%;

Establishment of state-owned second-tier oil and gas companies for Sabah and Sarawak (as well as Terengganu, Kelantan and other oil producing states) to benefit from the financial investments made into marginal fields through risk-sharing contracts (RSCs). The state-owned oil and gas companies will be nurtured to be able to compete internationally in the future in anticipation of reduced reserves in Malaysia;

A complete and upgraded Pan-Borneo Highway connecting Kuching to Kota Kinabalu and the east coast of Sabah to bring development in Sabah and Sarawak to be at par with Peninsular Malaysia; and

Assess the financial impact and viability of upgrading and extending the rail network in Sabah and Sarawak.
Posted by sabahkini.net at 08:56