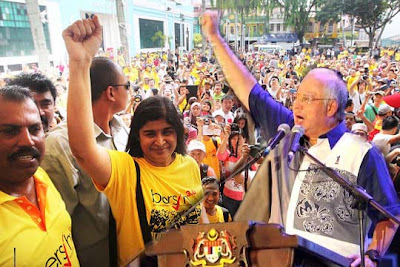 REFORMS....The prime minister says his raft of reforms also show his administration has delivered on its promise to improve civil liberties.

KUALA LUMPUR: Prime Minister Najib Tun Razak said today his law reforms proved his administration is all for human rights and has delivered its promise to adapt to growing demands for greater civil liberties.

The Barisan Nasional chairman said Malaysia was now more open following the repeal of three laws seen as infringements on human rights and promised recently to do away with more in a move seemingly aimed at charming fence-sitters just ahead of key polls.

“We have annulled the three Emergency proclamations which have led to a more human rights friendly legal environment and we repealed the three controversial laws – the Internal Security Act, Banishment Act, and Restricted Residence Act.

“We will also repeal the Sedition Act and promised the rakyat a better right to freedom of speech and expression, and amended the Printing Presses and Publications Act,” Najib said when opening an international law conference here.

He added that his government had also introduced the Peaceful Assembly Act to allow street demonstrations to take place.

Najib, who will lead his ruling coalition into what will be its tightest race to date, said voters should rate his performance based on what he does and not the promises in an apparent swipe at Pakatan Rakyat’s “populist” policies.

But the federal opposition bloc and rights groups maintained that civil liberties in Malaysia remained poor.

They claimed although most of the rights-curbing laws have been abolished, new laws equally inhibiting to those repealed have been introduced.

The National Harmony Act, which will replace the British-inherited Sedition Act, and, the Peaceful Assembly Act both have provisions that give space for arbitrary detention, legal activists said.

Najib’s reform credentials have also suffered a drawback following the government’s plan to take action against Suaram for alleged breach of laws in its registration process while government-linked media have tried to portray the human rights NGO as a “foreign agent” since it receives external fundings.

Suaram claimed the harassment was due to its role in exposing the Scorpene submarine deal scandal that purportedly involves Najib.

It had filed a case in the French courts who are currently probing into allegations of kickbacks from the deal although those accused dismissed the accusation.

Meanwhile observers also noted that Najib’s political reform will not last in light of the stiff opposition from the hawks from within his own party Umno. The conservatives form the ruling party’s powerbase. (FMT)