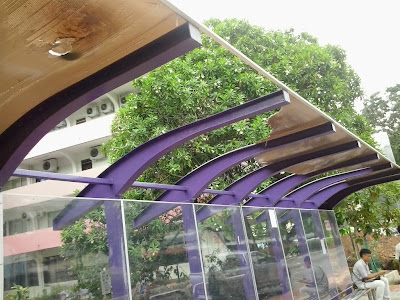 SHAME..... The broken down roof of the new bus stop.

A TOTAL of thirty new bus stops were built in Kota Kinabalu City by DBKK, and that is supposedly good for the bus commuters, but unfortunately the newly build bus stops does not last long. These new bus stop shed are in a broken down stage. The contractor obviously has done a bad job.

More than twenty bus stops are spotted with broken poly carbonate roof coverings.  Andrew Lee, the Special Assistant to the KK MP Hiew King Cheu went to check on the bus stops after receiving public complaints from the bus stop users in the city.

At this point of time the public will have to put up with the inconvenience from the hot sun and getting wet during the rainy season.  With this poor materials used as the roofing material, does it mean that the DBKK has to get another contract out to benefit its contractors?

This is definitely a waste and inappropriate use public fund. We want something that is cheap, lasting and looks pleasant, and no those material that is sub-standard and lasted only a short while. The polycarbonate definitely cannot withstand the sun heat and the strong wind.

Sabah DAP urges DBKK to take action to find out why this type of roofing material was specified and who approved this materials which is being use as a roof cover for the newly build bus stops in KK.

According to the supplier of polycarbonate roofing sheet, the good quality type should last at least 10 years or more. In this case, there must be something no right either with the contractor or the engineer, and the public deserves an explanation. This is a very embarrassing scene to our tourists and to our Sabahans.
The Mayor of Kota Kinabalu must 'Turun Padang' and sees for himself. Sabah DAP urges the DBKK must carry out repair works immediately for the sake of the public convenience.