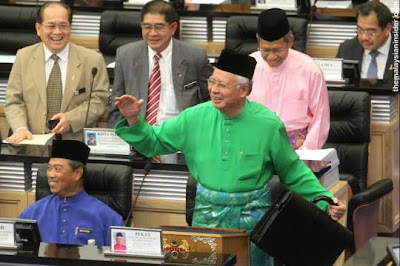 KUALA LUMPUR : Putrajaya expects strong domestic demand to support the economy next year, offsetting a weaker export sector and helping the country to sharply reduce a budget deficit that ranks behind only Japan and India in Asia.

The annual economic report for 2013 released today forecast improved economic growth, lower government spending and a narrower budget deficit as the government prepares for a closely-fought election which must be held by early next year.

The report’s release coincides with Prime Minister Datuk Seri Najib Razak’s announcement of the Budget for 2013, which a senior official said yesterday would be slightly expansionary while remaining “fiscally responsible.”

The stronger growth is expected to boost revenues and allow the country to lower its budget deficit to 4.0 per cent of GDP in 2013 from a revised shortfall of 4.5 per cent this year. The government had previously forecast a 4.7 per cent gap for 2012.

“The conduct of fiscal policy will continue to be challenging as fiscal resources have competing needs and goals,” the report said, adding that the government is committed to reducing the budget deficit to 3 per cent of GDP by 2015.

The Southeast Asian country’s public debt as a percentage of GDP is just short of its self-imposed ceiling of 55 per cent — up from 43 per cent in 2008.

Rating agencies Standard & Poor’s and Fitch recently warned of rising fiscal pressures in Malaysia that could lead to a downgrade. They want the country widen its tax base, reduce its dependence on oil revenue and cut back on fuel subsidies.

Najib is not expected to announce those major structural reforms today, but the annual report said that subsidy spending on staples such as fuel, sugar and flour should fall to 37.6 billion ringgit in 2013 from RM42.4 billion in 2012.

Government revenue for 2012 is expected to reach RM207.2 billion, surpassing an earlier target of RM187 billion. In 2013, revenue is projected to rise marginally to RM208.7 billion.

The government forecasts domestic demand will grow by 5.6 per cent in 2013 following a 9.4 per cent jump this year, with private sector investment and consumption partly making up for a smaller increase in government spending.