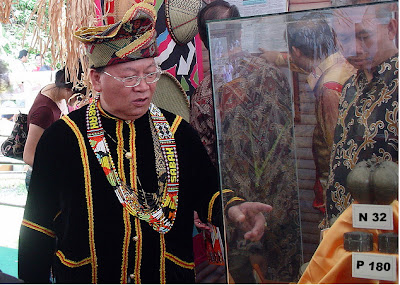 VOTE.....Despite views that Joseph Pairin Kitingan failed as a leader, it is unlikely that the Kadazandusun community will vote against him in the 13th general election.

TAMBUNAN: Opposition parties and their candidates are lining up to have another go at toppling Deputy Chief Minister Joseph Pairin Kitingan from a seat that he has held for over a generation.

Others have tried and failed but the times are changing and the opposition is gaining momentum mostly because of the growing perceptions of corruption in high places and the slow pace of development in the resource-rich state.

Now a veteran of Sabah’s murky politics, Pairin, can expect to be challenged by candidates from State Reform Party (STAR) and PKR, to name two, in the Tambunan state constituency in the coming 13th general election.

The Parti Bersatu Sabah (PBS) president can also expect challenges from several independents for the state seat which he has held for well over three decades since 1976 when he won the seat for Berjaya.

The septuagenarian politician who many say has become irrelevant in the Umno-led Barisan Nasional state government recently announced that he intended to defend his state and (Keningau) parliamentary seats, one more time.

The talk in the constituency of mostly Kadazandusun farmers is that the community’s Huguan Siou or paramount chief will easily get what he wants despite having accomplished little during his tenure both as chief minister during PBS reign from 1985 to 1994 and then as current deputy chief minister in the ruling coalition government.

The sleepy town of Tambunan nestled in the valley of the Crocker Range is located 80 kilometers east of Kota Kinabalu and is bordered by Ranau in the north and Keningau to the south.

Lawyer Mozes Iking who contested against Pairin, now 72, in the 2008 general election contrary to the belief of many garnered 2,820 votes to the surprise of many against Pairin’s 5,601 votes. Another contender Francis Koh managed 157 votes.

Iking has told FMT that he will not be contesting under any of the political party banner in the coming election.

A former police officer, he is now a close aide to the Sabah STAR chairman Jeffrey Kitingan who is the younger brother of Pairin.

According to a Tambunan PKR member, Pakatan “will definetly be fielding a candidate”.

The PBS president has faced numerous challenges for the seat which has become shaky for the BN due to perceptions that the community has been sidelined despite having a deputy chief minister as their representative.

The likely contender from STAR is Nestor Joannes whom the Huguan Siou defeated in the 2004 general election.

Joannes had then contested as an independent and polled 2,017 votes against BN’s Pairin’s 5, 297 votes.

It was in the same year that Pairin won the Keningau MP seat uncontested.

The 2008 election saw the Kitingan’s brothers facing each other for the Keningau MP seat with the elder managing to retain the seat for the BN polling 14,508 to Jeffrey’s 10, 334 votes.

Jeffrey was at the time with PKR. Independent Peter Anthony Kodou managed 560 votes.

Observers note that Pairin as the Huguan Siou has an advantage in any elections as the community is unlikely to snub its own paramount chief irrespective of his political stance.

A look at previous election results show that Pairin had contested both as an opposition or ruling coalition party candidate and won comfortably.

However the bigger question being posed is whether he will be able to breath new life into his failing party and its secondary position in the BN. (FMT)
Posted by sabahkini.net at 16:12