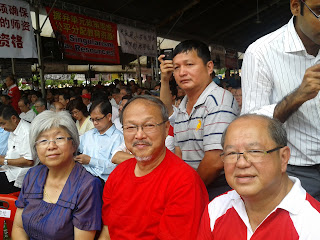 THE 325-CHINESE Education Gathering organized by the Dong Zong (United Chinese School Organization) was successfully held with a huge turn out of some 10,000 people (5,000 more than the original estimated), who packed the assembly place at the Dong Zong Head Quarter in Kajang, Selangor.

The crowds were made up of the general public, 640 associations and political parties including the many Members of Parliament and Assemblymen from the Pakatan Rayat. The DAP had 26 YBs and PKR had 20 and Pas also sent their top people and members to support the event, apparently this is a matter not only concerning the Chinese community. The Indians and Malays have come to show their support and expressed the concern in solidarity and as Malaysian.

The event was carried out in a very orderly and peaceful manner, without any disturbance from the police and there was no incident. There exceptional loud shouting when the Assistant Education Minister Datuk Wee Ka Siong was being mentioned during the speeches many times. The crowd was very angry and took it all out on him. When he left the gathering place, they were all shouting and thumbs-down, and he needed the escort of heavy protection to get out. 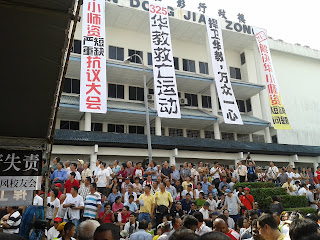 This gathering signified the angers and dismays which have built up these many years, and it is 40 years on the lacking of teachers in the Chinese primary school in the country. The government had never been able to get the problem solved, as mentioned in the speeches by the pronounced educationists the government is practicing double standard.

This has seriously affected the function and progress of the Chinese education in Malaysia. The huge turn out from every corners of the country has reflected the seriousness of the problem.

The government is sending teachers who do not know Chinese to teach in Chinese school also caused anger and dismay. The people have demanded the government to take away these teachers and replace them with Chinese speaking teachers. It is improper to do so. 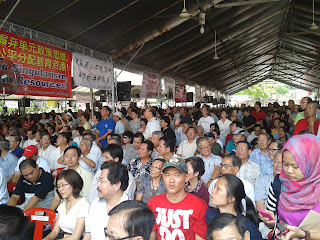 The KK MP Hiew King Cheu has participated in the 325 - Gathering, and he found the pointsand the issues raised by the various speakers are valid and reasonable. The Chinese education had been suppressed under unfair policies and ruling of the present government which caused many Chinese primary school suffered deeply and especially the young students who were deprived of the chance of better learning.

He said he had been working with the Chinese schools in KK for 20 years, and he knows exactly how it is like. Many schools spend their own money from the management boards and the Parent Teacher Associations to employ their own temporary teachers to fill up the posts.

No wonder the people are so angry and upset. One man at the gathering told MP Hiew saying that when he was a student he suffered, and today his grand son faced the same problem in the Chinese school. In the gathering, there were many resolutions raised and passed, and the 10,000 people there all supported with one voice. It is a historical moment that the people are telling the BN government and the whole Malaysia that it is time to change.