SABAH IS UPBEAT ON TOURISM 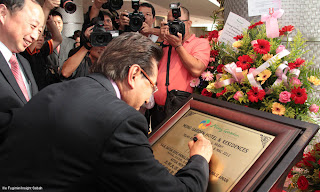 WATCHES....Zhou Jing De watches Musa Aman as he signs a plaque to launch his hotel.

These routes to Japan, South Korea and Australia are important to Sabah’s tourism. Nevertheless, Sabah Chief Minister Musa Aman is upbeat because the industry is resilient. And he expects more tourists this year.

His optimism is not unfounded. Ming Garden is owned by China’s Long Yuan Construction Group Company Limited and managed by Hong Kong’s 5-Element. They have been bringing Chinese tourists to the state since its soft opening in December. Chinese made up almost 40% of last year’s 2.8m tourists. 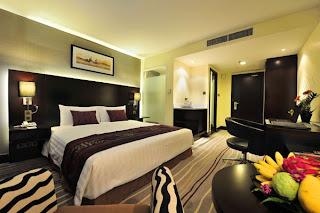 Long Yuan, says Zhou Jing De, its vice-president, spent about 200m ringgit ($65m) to build the 11-storey Ming Garden which comprises 356 flats that have been sold; but their owners have leased them to the hotel to house tourists. Construction started five years ago.

The project on slightly less than a hectare (two-acre) is a joint-venture between the Sabah government’s Sabah Urban Development Corporation and Long Yuan. It has not cost it a sen as Long Yuan paid for the entire project. SUDC however has made a profit of 20m ringgit from the deal, according to Juslie Ajirol, its chairman.

Juslie says there will be future income from leases and the running of the hotel’s car park.

There are 511 hotels in Sabah of which 163 are in Kota Kinabalu. Seven of them are five-star and seven four-star. Alex Cham, chairman of the Sabah and Labuan chapter of the Malaysian Association of Hotels, says there is an oversupply of rooms in five- and four-star hotels in Kota Kinabalu.

Ming Garden and the new Horizon Hotel add 800 rooms which may push occupancy rate down to 60% and lower, according to Cham.

Still Musa is optimistic. He thinks there is room for more hotels as tourist arrivals are expected to increase. The travel industry has already made alternative arrangements to bring tourists from Japan, South Korea and Australia to Sabah. (Insight Sabah)