NOT NATIVE, SO WONG'S CERT INVALID 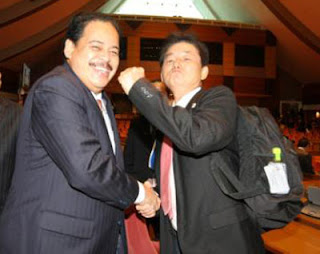 Hajiji said the information on Wong's 'Sino-Kadazan' race status in the certificate contradicted with his actual race, which is Chinese.

"There is not a drop of Kadazan blood flowing through his body because both his parents are of Chinese descent as stated in his birth certificate," he told the Assembly sitting when winding up for the Ministry.

Wong, however, was not present in the House when Hajiji rose to give his winding up speech late Tuesday evening.

Hajiji said the Board Members appointed by the Head of State through Government Gazette No. 11 for year 2010, conducted an investigation, research and validation on Wong's native certificate.

He said the board's officers found that Wong did not fulfil Section 2(1) of the Interpretation (Definition of Native) Ordinance (Cap 64).

The Board's decision, he said, has been presented to the Kota Kinabalu Native Court to cancel Wong's SAN.

"However, because the Kota Kinabalu Native Court was only gazetted in December last year, the board's decision can only be implemented in the near future," he said.

Wong's native certificate at one point became a hot issue even in previous Assembly sessions when questions arose on its validity.

Sekong Assemblyman Datuk Samsudin Yahya, who had many run-ins with Wong in Assembly sittings, asked whether the cancellation of Wong's native certificate would have any impact on the NT-titled lands that the latter had acquired.

Balung Assemblyman Datuk Syed Abas Syed Ali then raised the issue of offspring from inter-marriages like in his case, saying they should be accorded Bumiputera status.

According to him, his father is an Arab while his mother is of Suluk origin but his race status in his identification document is stated as Malay.

He said an Arab in Sabah should be considered as Bumiputera.

Melalap Assemblyman, Datuk Radin Malleh at this juncture said the definition of 'native' should be applied to determine this.

He asked, "How can an Arab become a native in Sabah?"

Hajiji then intervened saying because the interpretation is a sensitive issue, he would be issuing a written reply later.

To the proposal to conduct a specific study so that Arabs, Bugis and Indians who have been living in Sabah since the pre-colonial era be considered natives, he said the interpretation on 'native' is guided by the Interpretation Ordinance (Definition of Native) 1952.

Inanam Assemblyman, Datuk Johnny Goh then asked Hajiji's Ministry to consider the plight of the Sinos in Sabah.

He said the National Registration Department (NRD) gave these groups a choice, either to put Chinese or Kadazan/Dusun/Murut in their identification documents.

Hajiji replied that his Ministry would look into the matter.

On Pantai Manis Assemblyman, Datuk Abdul Rahim Ismail's, concern over trading licences being issued to foreigners, he said all local authorities always ensured that the licence is only given to Malaysians.

"If there were foreigners conducting business in a premises, they are probably workers or renters who have obtained permission from the premise's owner," he said.

"It is unlikely that local authorities or district councils issue trading licences to these individuals or groups that are not Sabahans or Malaysians," he said.

Nevertheless, he said, the Ministry would be monitoring this to ensure that only qualified people are issued trading licences. (DE)