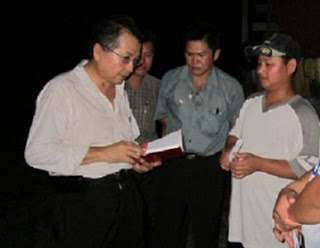 A FEW MONTHS ago, we highlighted our concern for a possible land-grabs and displacement of natives in the Bungaliu and Bubuk areas in Tempasuk Kota Belud for a purported agropolitan project. The authorities have stopped coming for a while, after Antonis was called by the Tempasuk assemblyman to his office, but only for awhile.

After failing to convince the villagers, however promoters of the proposed 3,000-acre agropolitan came up again recently escorted by police force to the kampungs and even asked that a fence guarding the said kampungs and the NCR lands be dismantled so that their vehicles could go in.

This we relented but we will not allow this to continue. We shall fight for our rights until the whole world knows that there is a government who bulldozes projects as long as the natives are displaced or victimised by their greedy and uncompromising style.

We would like to avoid a direct showdown with the authority, but if they insist then the Dusun Tindals in Tempasuk will rise to fight these displacing agropolitan project which was supposed to take away our NCR lands, some with grown rubber trees, only to be replanted with another rubber trees !

Our concern surfaced again as very recently there were groups coming to our kampungs some masquarading as from the Forestry Department but they carried certain gadgets and left behind plastic markings in various points.

We don't know what they were doing but we are reminding ourselves that this government is not unknown of its intention to ignore the natives when it comes to projects and NCR lands.

Our message is simple, listen to the people and their aspirations. Engage us as stakeholders of any public projects, please don't treat us as merely the receiving-end of just any of your unrefined development ideas, sometimes so ill-conceived that it only wasted the public money and time and sent the people to miseries after miseries.

There are hundreds of villagers from Kampung Bungaliu and Kampung Bubuk who are determined to stop the surveying of the coveted land, which they claim native customary rights (NCR) and which has already been cultivated with rubber trees and cash crops including hill paddy on shifting cultivation basis.

According to our estimate, of the 3,000 acres identified, 800 acres is in nearby Rosok Kanibungan while the remaining 2,200 acres would be carved out from the Bungaliu and Bubuk NCR areas.

Before this, Antonis was called to the district office and told not to object to the proposed federal-funded project to make Kota Belud a main food producer. We don't quite know what was on the authority's mind as we also heard they planned to plant rubber trees, and surely this is not a food staple, to contribute to the district being turned into a food producer.

Antonis was called and they pressured him with a lot of strong words that he must not object the agropolitan project because it is a huge project by the government.