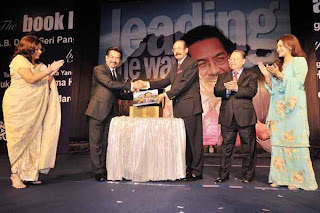 THE GLOWING tribute by PBS President, Joseph Pairin Kitingan, to current Chief Minister Musa Aman does not go down well with Sabahans at large, especially the Kadazandusun community who more often than not, marginalised by Musa's UMNO-led government. Either Pairin must have forgotten, or he is just too detached from the reality.

How could Pairin, the Huguan Siou, stoop so low to 'angkat kaki' UMNO when he knows it best that during the tenure of Musa, the Kadazandusun community has lost much including their NCR lands.

Illegal immigrants also has engulfed our state, driving out the original Borneo natives into oblivion. Didn't Pairin and his PBS know that under this very government, the Kadazandusuns were deprived of jobs and promotions opportunities in both the public service and even in private?

Yet Pairin did nothing but instead glorifying and worshiping Musa and UMNO like gods of the heavens.

Today, Pairin in paying tribute to Musa's leadership, was reported to have said among others that "there is no doubt that he (Musa) is a very caring Chief Minister.." Pairin said this at the launching of a 390-page book on Musa titled 'Leading The Way - Musa Aman' by the Yang di-Pertua Negeri, Juhar Mahiruddin.