OK FOR BILL TO INCREASE DATUKSHIPS 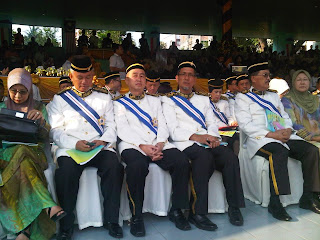 Minister in the Chief Minister’s Department Datuk Nasir Tun Sakaran in tabling the bill said the amendment would increase from the present 150 to 180 the maximum number of recipients of the first grade of the state award or Seri Panglima Darjah Kinabalu (SPDK), which carries the title of Datuk Seri Panglima.

He said the number of recipients of the second grade award, Panglima Gemilang Darjah Kinabalu (PGDK), which carries the title of Datuk, would be increased by 200 from the current 1,200 to 1,400.

He said this was in consideration of the increasing number of eligible individuals to be conferred with the honors every year.

“In appreciation and recognition of those who have given excellent services and contributions to the state, it is appropriate for the state government to confer them with state awards.

“We are confident that this will encourage them to continue to contribute to the state and country,” he said.

The bill was passed unanimously without any debate. (theborneopost)