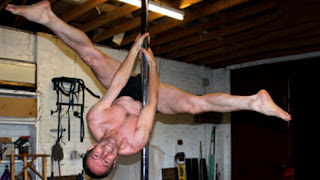 BEST.....Paul Bradley reckons pole-dancing is probably the best work-out he's ever had.

LUCKY father-of-two Paul Bradley has found a clever way to watch pole dancers without getting into trouble - by becoming one.

Happily married Paul, 53, has made loads of new friends through his hobby - who all happen to be toned and blonde.

The IT worker, from West Wellow, Hants, Hampshire in the UK, spends hours in the dance studio working up a sweat with his super-fit classmates.

And Paul reckons it's probably the best work-out he's ever had.

He said: "I get so much stick over being a male pole dancer but I absolutely love it - let's just say, there are loads of benefits."

"A female friend of mine got into it. She knew how I like to stay fit and promised me I would be impressed with the workout."

"She was right. It is a great way to keep fit and I can honestly say it's one of the toughest workouts I ever done."

"I thought I was fit but I can't believe how much stronger I am since taking the class."

Paul has even installed a pole in his garage where he and his friends can practice.

The former rugby player and competitive weightlifter says pole fitness routines have boosted his strength and stamina so much he can outstrip men half his age for fitness.

He said: "My 25-year-old son challenged me to a sit up contest recently. I did 50 sit ups with a 60kg kettlebell on my chest with ease - he didn't stand a chance." (web.orange.co.uk