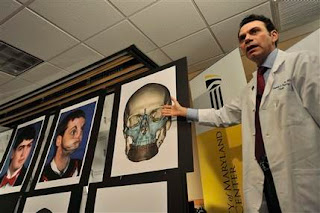 AFTER 15 years of wearing a mask and living as a recluse, a 37-year-old Virginia man disfigured in a gun accident got a new face, nose, teeth and jaw in what University of Maryland physicians say is the most extensive face transplant ever performed.

Richard Lee Norris of Hillsville is recovering well after last week's surgery, beginning to feel his face and already brushing his teeth and shaving, University of Maryland Medical Center officials announced Tuesday. He's also regained his sense of smell, which he had lost after the accident.

Norris, who was selected from among five possible candidates for the surgery, has been living as a recluse, doing his shopping at night. It's hoped the transplant will give him his life back, said Dr. Eduardo Rodriguez, the lead surgeon.

"It's a surreal experience to look at him. It's hard not to stare. Before, people used to stare at Richard because he wore a mask and they wanted to see the deformity," Rodriguez said. "Now, they have another reason to stare at him, and it's really amazing."

Rodriguez showed a 1993 prom photo of Norris, "as we all want to be remembered," beside a pre-transplant photo of Norris' shortened face with a sunken mouth and flattened nose. He then revealed a photo of Norris taken on Monday, where his face appears ordinary, other than stiches along his hairline and neck and scarring around his eyelids. Although he now has the donor's face, he doesn't resemble the donor, Rodriguez said.

"It's a combination of two individuals, a true blend," he said. 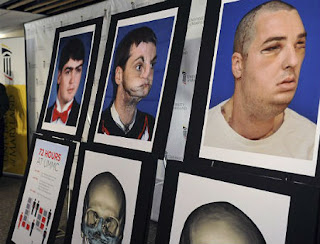 Norris' vision was largely unaffected by the accident. Because of numerous reconstructive surgeries, his forehead and neck were mostly scar tissue. Norris had no teeth, no nose and only part of his tongue. He was still able to taste but could not smell.

"He could not smell for the past 15 years, and that was the most dramatic thing - immediately, on day three, he could finally smell," Rodriguez said.

Officials provided little detail on Norris or the circumstances of the accident that took his face. He graduated from high school in his small southwest Virginia hometown in 1993 and was employed at the time of the accident. Since then, he has lived with his parents and has not had a full-time job, Rodriguez said.

"This accidental injury just destroyed everything. The rest of his friends and colleagues went on to start getting married, having children, owning homes," Rodriguez told The Associated Press. "He wants to make up for all of that." (AP)