HISHAM, NASIR KNOW WHAT THEY ARE DOING 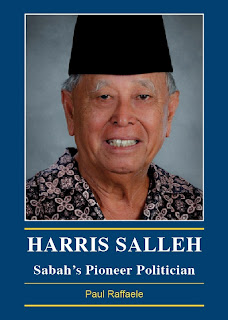 "It is not appropriate for him to call for the exercise to stop. After all, the decision to carry out late registration must have been made by the Cabinet.

"Secondly, Anifah must respect the Minister of Home Affairs and Minister in the Chief Minister's Department Datuk Nasir Tun Sakaran.

"Surely both ministers know what they are doing. Anifah should at the forthcoming Cabinet meeting on Wednesday ask the Cabinet to make a decision to stop the exercise," he said in a statement, Monday.

Harris said it was noted that over the last few months there were demands from Sabah leaders on this and that.

"And many of the statements made, were not in accordance with facts, laws, policies or more importantly fair and just. This attitude and trend of leaders will increase tension especially among the races and more so between the State and Federal government," he said.

"Take for instance on the issue of natives. This is provided in the interpretation of native law made by the British. I'm not sure whether the law had been withdrawn.

"A law is a law. However, in the case of native land rights it is more of a moral issue or more importantly the right of natives to own land.

Leaders must remember that the land is the future economic future for the natives of Sabah - there is nothing else for them.

"The native of Sabah are being left further and further behind, Therefore it is high time to solve the land issue for the natives once and for all," he said.

Harris said he was informed by the Director of National Registration some five to six years ago that the mobile late registration exercise was going very well.

He claimed at that time over 50,000 people at the Tenom and Keningau as well as Pensiangan districts had registered and obtained late registration birth certificates to enable them to obtain Malaysian Identity Cards.

However, there was poor response from the East Coast especially Semporna where there are thousands of boat people who did not come forward.

Things were running smoothly and nobody from either Tenom or Keningau questioned or demanded to stop the exercise.

Harris said politicians or leaders should not interfere with the work of civil servants.

"Once a law or policy is adopted, the civil servants will carry out accordingly.

"These decisions remain in force unless and until they are revoked by the Federal Cabinet," he said.

In this respect, Harris said it was high time that the government be consistent and adhere to the laws and policies made.