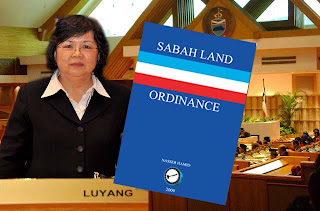 THE new amendment to be introduced to the Land Acquisition Ordinance (Cap 69) is not well received by the opposition who said the new law would provide a loophole that could be exploited to rob the people of their lands.

Melanie Chia Chui Ket (SAPP-Luyang) in objecting against the amendment, said a land which acquisition had been revoked should be returned to its original owner or immediate relatives.

However, she pointed out, the new amendment states that the land can revert to either the 'owner' or 'the person interested in the land', which could be anybody as there were no definition given on who that 'person' should be.

“Our objection is that it should not be given to somebody else… you should not have the terms “person interested” without explaining who that is, or how the transfer of land should be done.

“By right, the land should be given back to its rightful owner, or if they are no longer around, to the immediate heir. It may be a simple amendment that you think that there is nothing to it, but a simple term could have big meaning and repercussion,” she told reporters when met outside the Dewan.

Melanie and two others, namely Datuk Liew Teck Chan (SAPP-Likas) and Jimmy Wong Sze Phin (DAP-Sri Tanjung), earlier walked out of the Assembly Sitting in protest to a decision by Deputy Speaker Datuk Johnny Mositun not to allow them to debate the bill on the amendment.

The three who called for two separate press conferences after the sitting, accused the deputy speaker of failing to uphold the constitutional procedure of the Dewan by denying them their rights to debate.

Johnny denied Jimmy’s request, reasoning the latter did not stand up when the representatives were called to debate before the Dewan proceeded to the second reading of the bill.

“Yang Berhormat should have stood up before the second reading was called, but you did not and now it is too late and the speaker’s decision is final. We shall proceed,” he said.

Melanie, who also wanted to debate the amendment, said Jimmy had actually stood up but the deputy speaker did not look at him before calling for the second reading to have the bill approved.

The bill was to allow for a new section to be inserted after Section 10 of the Land Acquisition Ordinance, to empower the Yang di-Pertua Negeri to revoke the acquisition of any land which has been acquired compulsorily under Section 3.

Assistant Minister to the Chief Minister Datuk Datu Nasrun Datu Mansur in tabling the bill, said the amendment was needed as currently there were no provision to allow the land acquired to be returned to its owner in case the government could not develop it in accordance with the purpose of the acquisition.

“The absence of the needed provision does not benefit both the government and the owner as the land could not be used further,” he said, adding that the inclusion of the new section would standardize the state’s land acquisition laws with Peninsular Malaysia and Sarawak.

The bill was passed without any debate. (theborneopost)