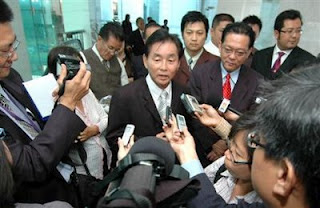 SRI TANJUNG Assemblyman, Jimmy Wong proposed amendments be made to the Sabah Land Ordinance 1930 to make the State Cabinet and Director of Land and Survey comply with certain criterion, failing which any aggrieved person can go to court for remedy or for judicial review.

"I would like to propose that the Ordinance be amended once and for all, especially the relevant sections referred to by State Attorney-General Datuk Roderic Fernandez.

"This is because despite what the A-G said, it is very obvious that when cases go to court and the A-G is representing the State Government, the State A-G will be presenting the same arguments before the court.

Hence we can take it that what the State A-G said on the Native Customary Right is the State Government's position," he said.

Wong said Section 9 of the ordinance must also be amended since its effect was so wide in nature and that the powers to alienate state land rest solely on the Cabinet and the Director alone.

Wong proposed that the criterion to be considered are:

"Failure to adhere to these criterion means that the Director's decision to award the title is not done bona fide," he said.

Wong said the proposed amendment to Section 9 does not mean that West Malaysians and foreigners are also eligible to apply for land in Sabah.

"This is not right. I suggest only Sabahans are eligible to apply for land in Sabah. Outsiders are prohibited. Any Sabahan using companies to apply for land should not be allowed to sell the company to any outsider for quick profit.

"There should be a heavy penalty for sale within a certain period of time after the development of the land," he said.

It should also be made mandatory for all applications to be published in Sabah newspapers with good circulation and government websites to enable all stakeholders and natives (in the case of NCR claims) the right to object, he said.

Wong also asked the amount the State Government is still owing water concessionaires in the State.

Meanwhile, a war of words between Jimmy and two BN backbenchers later resulted in the latter being shown the door by Speaker Datuk Salleh Tun Said Keruak.

Wong had earlier defied the Speaker's ruling to end his debate.

Wong started his speech at 12.59pm. After being interjected by various point of orders raised mostly by Sekong Assemblyman Datuk Samsudin Yahya and Bugaya Assemblyman, Datuk Ramlee Marhaban he was still on his sppech at 1.57pm.

Salleh, nonetheless, gave Wong the opportunity to conclude his speech, but he could not do so, as he also had to respond to interjections by Samsudin and Ramlee.

Wong was then given another two minutes by Salleh but refused to comply, resulting in the Speaker asking him to sit down and let Kuamut Assemblyman, Masiung Banah proceed.

Wong, however, continued with his speech despite repeated warnings from the Speaker to sit.

Finally, Salleh was left with no choice but order Wong to be removed from the House and barred from following the proceedings for one day under Standing Order 52.

Met outside, he expressed disappointment saying he should have been given a bit more time since there were only three opposition members in the 60-seat House. (DE)