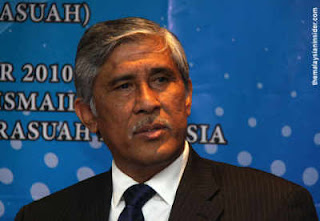 INVESTIGATE....Abu Kassim said the MACC would investigate all reports of corruption, provided there was sufficient evidence of graft.

DATUK Seri Abu Kassim Mohamed today insisted the Malaysian Anti-Corruption Commission (MACC) will probe all instances corruption, after being accused of reluctantance to investigate the Attorney-General and the former Inspector-General of Police.

But he added that there must be an element of corruption as the law did not allow them to investigate anything other than corruption.

The MACC have been previously criticised for its apparent inaction despite repeated allegations and evidence of wrongdoing being presented against A-G Tan Sri Abdul Gani Patail and former police chief Tan Sri Musa Hassan, primarily in relation to Datuk Seri Anwar Ibrahim’s 1998 assault while in custody.

Former senior police officer Datuk Ramli Yusoff reportedly also said yesterday the MACC could not investigate the his accusations against the duo as it was the very agency used by Abdul Gani and Musa Hassan to “fix” him and his men, Malaysiakini reported.

Today, Abu Kassim reiterated that MACC would investigate any information where offence of corruption had been committed, as long as the information was “justified” and enough facts were given.

On Monday, Home Minister Datuk Seri Hishammuddin Hussein said the MACC would be the best agency to investigate such cases.

“If they want an investigation, we can investigate. But the proper agency to do so is the MACC. This is because it involves a former IGP, and if the police investigate, they (the opposition) will say that it is not fair,” Hishammuddin said in Parliament during his winding-up speech for the debate on the Royal Address for his ministry.

He was responding to queries from R. Sivarasa (PKR-Subang), Gobind Singh Deo (DAP-Puchong) and Datuk Mahfuz Omar (PAS-Pokok Sena), asking him to respond to the serious Ramli’s allegations