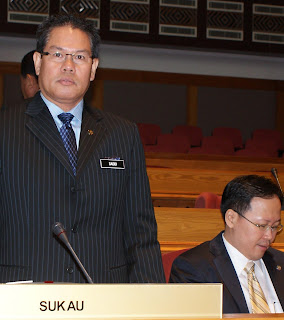 Participating in the debate on the motion of thanks to the Head of State's government policy speech at the State Legislative Assembly here Tuesday, Saddi said Hamzah's statement was not only insulting to a person who had been appointed as the Head of State but also an affront to the Sabah Istana Negeri institution.

It also means that Hamzah was disputing and had insulted the appointment, which was decided by the Yang diPertuan Agong and Rulers' Council, he said.

Saddi also agreed that the Justice of the Peace (JP) award held by Hamzah is best withdrawn under the circumstances.

Many police reports have been lodged to the police and Malaysia Communication and Multimedia Commission as well as Information Ministry calling for investigation against Hamzah, he said.

Towards this end, Sekong Assemblyman, Datuk Samsudin Yahya interjected and asked if Saddi agrees that the government should also consider withdrawing the JP title awarded to Hamzah. Saddi answered in the affirmative.

On another note, Saddi also questioned the delay behind the Sukau New Township project, which had not taken off after the ground-breaking ceremony was held 18 months ago.

He said it would be difficult for the relevant agencies and investors to come in if works on the basic infrastructures had yet to start.

Saddi also criticised the non-seriousness of some government servants in expediting the implementation of the project. (DE)