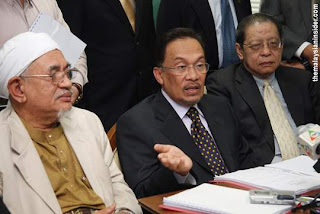 MANIPULATION ......Anwar (centre) said the EC has yet to address complaints regarding the manipulation of the voter registry.

PAKATAN Rakyat (PR) may not hold state elections concurrently with the national polls if the Election Commission (EC) fails to implement meaningful electoral reforms even after being compelled to do so by Parliament.

PR de facto leader Datuk Seri Anwar Ibrahim said today that a decision on the matter was yet to be reached, but added that the pact’s choice would be 'influenced' by the EC’s response to the parliamentary select committee’s (PSC) recommendations.

The PSC, which is meeting for the last time today, will be tabling its final report to Parliament next Monday.

But Anwar revealed today that throughout the committee’s six-month investigation, PR lawmakers - who are also members of the panel - had found the EC lacking in commitment to implement meaningful reforms as promised by Prime Minister Datuk Seri Najib Razak last year.

“We still have to state our strong objection because until now, the EC has not cleaned up the electoral roll, especially when the election is so near,” he told a press conference here.

He said the leaders of PR states are still negotiating on whether to hold simultaneous polls with national elections, but added there was fear the alleged voter roll manipulation could greatly affect the pact’s chances if it remains unresolved.

“I think we have to sit with them again. No decision has been reached yet. We have the option of whether we should hold it all together but it is still open,” he said.

Anwar stressed that the 'central issue' to PR now is to ensure the EC commits itself to electoral reforms.

“We have compelling evidence and facts to support our argument that the (election) process is fraudulent. So that’s the issue and that will influence our decision (on whether to hold simultaneous polls),” he said.

Anwar added that PR would continue pressing for reforms in the election process even if the EC failed to do so.

Barisan Nasional (BN) experienced its worst electoral result during the 2008 general election, when it lost five states to PR as well as its customary two-thirds supermajority in Parliament.

But Prime Minister Datuk Seri Najib Razak has indicated that he will soon call for a general election, adding that confidence in his BN has surged of late.

Umno-controlled Berita Harian reported the Prime Minister as saying in Port Dickson on March 24 that “rasa-rasa bunyi (PRU) dah dekat (it feels and sounds like (elections) are near).”

The Umno President said last week he would dissolve Parliament when public confidence towards his administration is at its highest level.

Observers say Najib, who took over in April 2009 ostensibly to improve on the ruling coalition’s performance, will need to return BN’s two-thirds majority to guarantee he remains in power.