WHY IS LEO A NO-SHOW AT TITANIC 3-D PREMIERE? 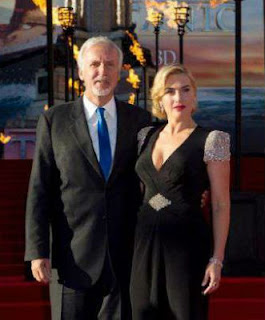 BEFORE Edward and Bella, there were Jack and Rose. Between 1997 and 1998, the world was captivated by a heartwrenching tale of a pair of star-crossed lovers on a doomed ship.

The filmmaker, along with stars of the 1997 blockbuster, Kate Winslet, Billy Zane, Frances Fisher and Bill Paxton, were all present at the world premiere of Titanic 3-D.

One person that was noticeably absent was Leonardo DiCaprio. Did DiCaprio, 37, snub the film that shot him to superstardom and was responsible for phenomena called Leo-mania? It turned out that the actor is working hard on the Louisiana set of Quentin Tarantino's star-studded new project Django Unchained.

Despite the leading man's no-show, his name is still mentioned in conversations between Cameron and the press.

Speaking of the chemistry between DiCaprio and Winslet, he said: "They became brother and sister. I think of them as Kate and Leo, and I think of Jack and Rose as two people who exist separately. I think it's almost more so that way now—Jack and Rose are now the eternal young lovers. I think they have to deal with that as well."

Though he missed the premiere, DiCaprio was not left out for the 3D project, said Cameron, 57.

"I actually showed Leo 18 minutes of the 3-D version right before Christmas. He was sort of crawling under the seat, saying, 'Who is that guy?!' "

What about Winslet, who is now an Oscar-winning actress and a mother of two?

"I think I look better 15 years later. I like the way I'm aging, it's nice. I don't have any secrets, I just try to have a positive attitude," said the 36-year-old actress.

For your information, next month will mark the 100th anniversary of the real sinking of the RMS Titanic in the Atlantic Ocean on its way from England to New York City. (E! Online)