WIFE HOLDS DOWN HUBBY, LOVER CHOKES HIM TO DEATH 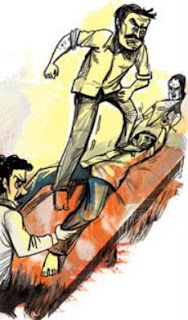 A 25-YEAR-OLD woman in Chembur, Mumbai, India, who was having an extra marital affair, sought the help of her lover and his friend to kill her husband.

The woman watched her husband die while her boyfriend choked him to death by stepping on his throat while she held on to his hands and feet even as he struggled for his life.

Sangita Chandrakant Varak watched her husband Chandrakant die as her boyfriend Ramchandra Shelke strangled Chandrakant's throat by stepping on it.

Sangita and Shelke's friend Ramesh Bawdhanea held on to Chandrakant's hands and feet, as he struggled and fought for his life.

Police arrested all three on Saturday after almost a month of investigations.

Based on investigations, Sangita was having an affair with Shelke for over a year and her husband was aware of her infidelities.

Realising the marriage was over, Sangita came up with a plan to end Chandrakant's life with the help of Shelke and Bawdhane on February 7 and decided to kill him on Fen 10 at about midnight.

Police had initially registered the case as unnatural death as they were unable to find any evidence of murder and the post mortem did not provide any clues.

However, suspicions were raised when Sangita kept offering different statements.