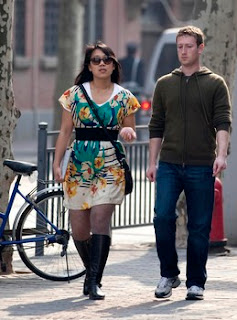 THE SIGHT of a vacationing Facebook icon Mark Zuckerberg in Shanghai has triggered online speculation over the possibility FB returning to China, even though the site remains firmly blocked.

Excited Chinese bloggers posted photos of Zuckerberg and his girlfriend at an Apple store and in Shanghai's art gallery district on Tuesday, expressing hopes it might mean access to the popular social networking site.

"Does this mean... Facebook is preparing to be unblocked?" said Kelisisong on the popular Sina microblog service, a Chinese version of Twitter.

Facebook has more than 800 million users around the world and is the leading social network in all but six countries, notably Russia, where local rivals are preferred, and China, where it has been banned since 2009.

Last month the California-based company said it continued to "evaluate entering China" - the world's largest Internet market - as it filed paperwork seeking to raise US$5 billion on Wall Street. 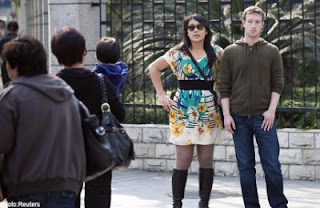 Analysts say Facebook's chances of re-entering the market of half a billion Internet users are slim.

Nonetheless, China's Internet users speculated the billionaire Zuckerberg might be seeking to make inroads into the market during his time in China.

"China has always been the centre of attention (for foreign technology firms)," said blogger Qimeng Luosong. "Maybe tomorrow morning when we get up, we can open Facebook."

Beijing attempts to block content it deems politically sensitive through a censorship system known popularly as the "Great Firewall of China". Web users can only access blocked sites through virtual private networks.

Zuckerberg said previously that he was "spending a lot of time" studying Chinese and visited the country in December 2010 with his girlfriend Priscilla Chan, when he met with the head of the country's biggest search engine Baidu.

Analysts believe Zuckerberg and Baidu were discussing a possible tie-up that could enable Facebook to enter China, but were forced to abandon the talks after the Arab Spring protests of early 2011 spooked Beijing.

Apple customers, who recognised Zuckerberg dressed in his trademark jeans, sneakers and hoodie asked to take photos with him but he declined.

"Zuckerberg introduces himself to mainland China in this way: 'Hi, I am the founder of the website page not found,'" another blogger joked, referring to the message users see when trying to view a blocked site. (Reuters)