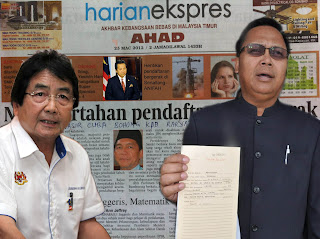 He said the Government must conduct a thorough investigation before issuing birth certificates or identification documents to these people.

He said the sudden huge number of applications for Malaysian identification papers was simply worrying. "I suggest a special committee to investigate the matter so as to stop certain people from obtaining the birth certificate and MyKad," he said.

Assistant Minister of Rural Development, Datuk Sairin Karno, also chipped in saying that most of the people who applied for the late birth registration in Sabah were actually foreigners.

He also urged the Government to carry out an investigation and that if there were parties involved, to take fast action against them.

"I am personally receiving daily reports that the exercise to provide late birth certificates and MyKads are going on in major towns in the East Coast (of Sabah) and the number of such documents issued are reported to be in the region of 1,000 per week," he claimed.

He concurred with Anifah that there are children from the other communities such Kadazandusun-Murut who have been waiting long to get theirs.

He said the authorities should seriously look into the statement by the President of Semporna Bumiputera Bajau Bajau Association (Perbubas), Mansor Santiri that "it doesn't make sense that a Bumiputera in Semporna does not have any identification documents."

"As I have repeated many times and have clearly stated in my memorandum which I have submitted to the Home Ministry, this is indeed a very serious matter as it really concerns the sovereignty of our country and Sabah in particular.

"The Federal Government should now seriously announce the setting up of the RCI, if indeed it has been approved by the Federal Cabinet, and get the Vommission to work immediately in order to get back the confidence of the bona fide Malaysian citizens in Sabah," he said.

"The issues concerned are what majority of Malaysians in Sabah want settled positively once and for all."