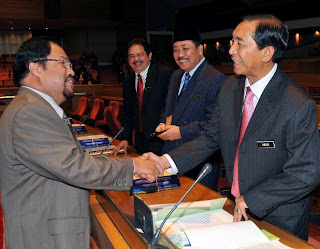 CHIEF Minister Datuk Seri Musa took the opportunity to remind Pantai Manis Assemblyman Datuk Abdul Rahim Ismail to stay on and listen to explanations and answers given by concerned government departments and agencies on issues highlighted by him (Rahim).

This was after Musa asked the Public Works Department (PWD) to provide explanations to problems of road conditions in Keningau and other districts that were highlighted by Rahim.

"In the previous sittings, I note he was regularly not present when all the ministries were providing answers to his complaintsÉHow could he understand when he is not here? Therefore it will be good for you to stay back so that you knowÉ," Musa said in the State Legislative Assembly sitting, Monday..

"Normally reps highlight problems in their respective constituencies but it seems the Pantai Manis Assemblyman highlights those for whole of Sabah.

"The State Cabinet recently directed the PWD Director to give a briefing on the road conditions at district and Federal levels in Sabah was made to understand the Director is satisfied with the concessionaire companies works and performance, so far.

"There are problems which fall under the Central Government responsibilities which the Department has forwarded to," he said.

Instantly, Rahim stood and thanked the State Government for taking action to address the (road) problems.

"Actually I have no job in Sabah. I am unemployed although I am an elected representative but luckily I have a job in Kuala Lumpur and it requires me to be there. When I have spare time I will be in Sabah.

"The best time for me to be in Sabah is during the Assembly sitting. I was absent for the previous winding up, I apologise and seek understanding from Yang Amat Berhormat (Musa). It will not happen again. This time, I will stay on."

Musa noted that before Rahim took up a better post as Risda Holdings Sdn Bhd Chairman, he was also the Malaysian Fisheries Development Authority Chairman (LKIM). But when he was appointed as the Inspectorate-General Projects in Sabah, he resigned to take up an important post from the Federal side."

In a return reply, Rahim said Musa did say that he (Rahim) was the ideal man for the LKIM post when he (Rahim) paid a courtesy call on him.

"At one time, I was offered the Sabah Land Development Board (SLDB) Chairman post. At the end of the day, he (Musa) offered me the Inspectorate-General Projects post.

"I am okay with the (Inspectorate-General Projects) post because you are my friendÉbut there was a golden opportunity from Kuala Lumpur (Risda Holdings Sdn Bhd Chairman) and I paid another courtesy call to get your (Musa) blessing and you said 'Okay', so I went for the job," he said.

To this, Musa said: "It's good that you politely came to see me. I did give you a post with Minister status but you took up the Federal post."

Just then Sekong Assemblyman Datuk Samsudin Yahya stood up by saying he should be the one to be disappointed as he was never offered any job with Minister post.

Sri Tanjong Assemblyman Jimmy Wong also stood up to join in but was shot down by Samsudin who reminded Jimmy that his Bumiputra Certificate had been confirmed to be fake. (DE)