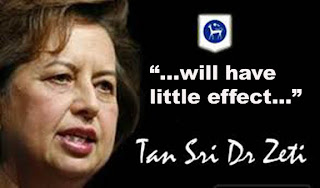 IT IS A RELIEF to hear the Governor of Bank Negara, Tan Sri Dr. Zeti Akhtar Aziz, saying that implementing the minimum wage will have little effect on inflation. We need also to answer all the negative reactions from employers against the proposal for minimum wage.

One of the realities we need to face is the fact that most of the low-income earners working as shop assistants and sales people are earning miserable incomes on which they can hardly survive.

I know girls with SPOM working in pharmacies earning only RM500, and restaurant workers earning RM400. If we look at these so-called salaries, they are just a little better than what slaves actually get.

With RM500 at the pharmarcy a girl get to spend so much on bus fares, food and drink, and at the end of the month get to keep about maybe a hundred – if she is staying with her parents! If she has to pay rental for accommodation, even sharing a room with other girls, they end up with nothing.

At least the ones earning RM400 in the restaurants get free drinks and meals, and sometime even get free, if compact, accommodation in some squalid rooms provided by the restaurant owners.

I have two nephews working in Johore who can’t go home to Sabah simply because even with the most lowly jobs there they take home around RM1,500 each and keep their single mom happy.

They are wondering how they can ever go back to Sabah because they know if they come back tomorrow they will end up earning around RM500, or at best less than RM1,000! Some in KL work in upper-class hotels 'just opening and closing doors' earn close to RM2,000 including tips. In KK they would be earning in the region of RM700 to RM900.

So the proposed RM900 as minimum wage is to me very reasonable, because that will give some relief to those who are being treated almost as slaves. Minimum wage will raise the wages of the small-income earners, not raise the salaries and allowances of the higher-income group.

The latter is done all the time but we have never implemented a minimum wage, which is a standard practice in many developed countries. We have proposed it but a lot of business people are scared stiff of it. But if we continue to listen to these slave drivers when is Malaysia ever going to become a high-income economy?

Don’t they realize that with higher wage the small people will be spending money and that way help to rejuvenate the economy with the trickle-down effect of their spending? I believe the Prime Minster must put his foot down and get this done as soon as possible, and not pander to the nonsense excuses of stingy bosses.