IT’S ALL DUE TO MUSA’S BUSINESS ACUMEN 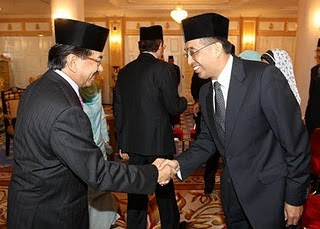 KOTA KINABALU: An uncanny business acumen and prudent spending by Chief Minister Musa Aman is the chief reason why Sabah continues to have an excellent financial management record.

Deputy Sabah Umno Chief, Salleh Said Keruak said Musa is well known for being a savvy businessman before he entered politics and these traits have since worked well for him since helming the government.

“We are fortunate to have a chief minister who is knowledgeable in business and economics and Sabah’s spending is never done wantonly; projects are well planned and development is carried out only if its benefits the people,” said Salleh.

“In briefings by our agencies and departments, the chief minister has never failed to stress on the need for prudent spending on government funds and to avoid wastage.

“He insists on all agencies to be self sufficient and profit oriented.”

Salleh was referring to the announcement by Auditor General Ambrin Buang that Sabah’s financial successes can be a benchmark for other agencies and departments.

On the forthcoming 2013 Budget which would be tabled by Prime Minister Najib Tun Razak in Parliament on Friday, Salleh said he hoped that there would be lots of goodies, especially for the people in Sabah.

He said that despite getting a substantial amount of development funds, Sabah could still do with more, in order to ensure that infrastructure such as roads, electricity and water supply as well as more schools be stepped up.
Posted by sabahkini.net at 19:11