RCI CAN ISSUE WARRANT OF ARREST? 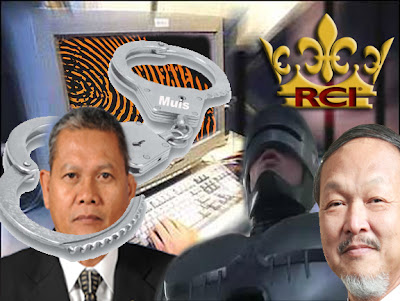 THE ROYAL Commission of Inquiry to investigate into the illegal immigrants problems in Sabah has the power under Section 8 of the Act 119 COMMISSIONS OF ENQUIRY. ACT 1950 to issue a warrant of arrest on the person who refused to attend to assist the investigation when asked by the commission.

This also includes all those people who required to be witness, investigated, to produce evidences either in writting or verbal and all relevant documents irrespective whether they have previously made the Secrecy oaths or under the OSA.

The Kota Kinabalu Member of Parliament Hiew King Cheu had brought the matter on whether the RCI commissioners are bound by the Secrecy Oaths since all the five were high ranking government retired officials, and that of the OSA.

The Minister in the PM Department Dato Seri Mohd Nazri Abdul Aziz replied that although the selected and appointed commissioners had made the Oaths of Secrecy before, this doesn't affect their appointment and work, because their work is only to investigate and report.

Furthermore, the 5 commissioners are not the witness or being investigated. The findings and the report when completed in six months shall be presented to the Seri Paduka Baginda Yang di-Pertuan Agong.

Under the Section 21 of the Act 119, the commissioners and the witnesses who produced evidence, documents, and in verbal are protected. This is to protect them from any civil suit or other action against them.

During the question and answer session, Hiew asked the Minister Dato Nazri on whether the various government departments in Sabah like the Police, Immigration, JPN, and the Sabah Chief Minister Department (JKM) are to be investigated first.

Nazri replied by saying that since the RCI has been formed and in force, therefore it is their power and jurisdiction to decide on their investigation boundries and areas.

Hiew commented that these departments are the departments who are dealing with all the matters relating to illegal immigrants in Sabah, and surely they have the details in hand.

Since the RCI has been given the power and protected by the Act 119, it should carry out its entrusted duty without fear and favour to probe into the matter which had hurt and given the Sabahan a long term pains and damages.

The Sabahan are waiting for some action and a thorough investigation to stop the issue of illegal immigrant permanently. We don't want them to become Sabahan.