A-G GOT IT WRONG ON RM213M PROJECT 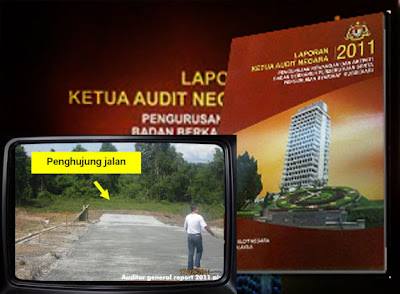 WHITE-ELEPHANT ....The A-G's 'approval' of a white-elephant RM213 million road and bridge project linking Kuching to the Isthmus area has raised questions.

KUCHING: Sarawak DAP has taken the Auditor General to task for not dissecting the feedbacks it received from the State Planning Unit. Citing the RM213 million construction of a road and bridge from Kuching to the Isthmus area, DAP secretary Chong Chieng Jen said the money spent was not justified.

“Whatever feedback given by SPU, the AG just accepted it and deemed the project as vital to ease traffic congestion.

“But if he is competent, he should have gone to the ground to find out how many cars are using the road, how many residents live there and how many buildings are in the area.

“The reason given for carrying out the project is to ease traffic, but there is no traffic from Isthmus to Kuching at all.

“And there are only two buildings. One is the Borneo Convention Centre Kuching (BCCK) and the other is the SESCO building.

“When the project was launched in 2008, there was only the BCCK. The project is therefore a wrong priority,” said Chong who is also Bandar Kuching MP.

“These roads are experiencing heavy traffic jams daily and yet RM100 million of the funds which are to upgrade roads in the urban areas were allocated to the building of the Isthmus Bridge and road.

“Had the RM100 million been channeled to these roads, tens of thousands of road users in Kuching would have benefited.

“On top of that, we are also asking the government to widen the Pan Borneo trunk road into a dual carriageway, but the government gave an excuse that less than 20,000 vehicles used the road per day.

“But for Isthmus at the time it was implemented not even 20,000 cars per year were coming from Isthmus to Kuching, and yet the project was given priority.

“It clearly shows the government when it comes to prioritisation of the project has other consideration in mind instead of the people’s interest,” said Chong pointing out that the Isthmus is belonged to CMS Land, a company linked to Chief Minister Taib Mahmud.

“Isthmus is owned by CMS land, a company owned by the family members of Chief Minister Abdul Taib Mahmud. Even when there is no heavy traffic, the RM213 million was allocated to the construction of the three-lane bridge project in order to increase the value of the land in Isthmus,” Chong alleged.

“I question the intention and the purpose of building the bridge,” he said.

Accusing the AG of failing in his duty, Chong said that a competent AG would have made a comment on this project which was a wrong priority.

“The money should have been used for the benefit of the people rather than one or two families,” he stressed. (FMT)