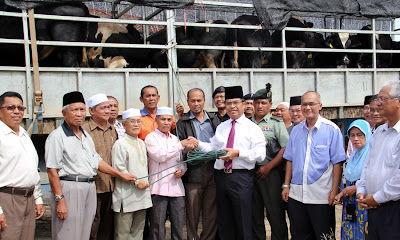 QURBAN ..... Deputy Chief Minister and Minister of Agriculture and Food Industry Yahya Hussin handing over cows to the representatives of mosque around Putatan area in conjunction with Hari Raya Qurban.

LAST Friday, Muslims across the world will celebrate Aidiladha which is also commonly known as Hari Raya Qurban or Hari Raya Haji in Malaysia.

Every year, millions of Muslims make the journey to Mecca in Saudi Arabia to perform the hajj, one of the five pillars of Islam. Muslims in the country celebrate the festival with prayers and the sacrifice of cattles.

Yahya Hussin, Minister of Agriculture and Food Industry were at the Putatan Distict Mosque to delivered 17 cows for 10 suraus and 11 mosques all over Putatan area.

“This are big Friesian cows and the sacrificial slaughter will be for the people especially the poor people in the community," he said.

The Imam of Putatan District Mosque, Mohd Noh Chalah, 64, said the slaughter of the cows will take place  after prayer in the morning of Aidiladha.

“The cows are killed in accordance with the proper religious ritual and the meat is then distributed,” he said. (Insight Sabah).