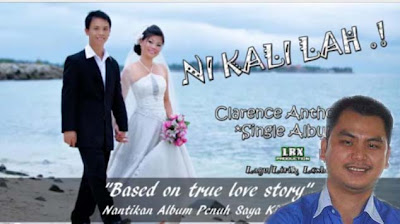 “STAR’s popular patriotic song INI KALI LAH!” had been in existence since 2011 and the lyrics are very different and was officially launched with the “Ini Kali Lah” Album on 20 April 2012 before a sold-out crowd at the KDCA Hall in Kota Kinabalu” said Hasmin Azroy Abdullah, STAR Youth Chief.

Hazmin response to  Clarence Anthonius who had lamented that government-owned radio stations not playing his “Ni Kali Lah” love ballad which was only launched in September.

It is regretted that the government-owned radio stations have equated the love ballad to STAR’s patriotic song for Sabahans and are unable to differentiate the songs, music and lyrics.

In fact, “Ini kali lah” or “Ni kali lah” is a general phrase in universal use in Sabah and carries no political connotations and should be allowed to be use without any prejudice or objections.

If the government-owned radio stations 'ban' STAR’s “Ini Kali Lah!” song which is about Sabah’s rights and STAR’s struggle for the restoration of these rights, it may be understandable given that even school children are singing the catchy tune although it shows the nervousness of the government in facing STAR’s popularity.

To bar the playing of Clarence’s “Ni Kali Lah” is completely uncalled for and reveals the narrow-mindedness and myopic vision of the radio stations.

STAR Youth wing wishes to congratulate Clarence for his song and his eventual marriage of the girl of his dreams and wish him every success in his album and songs.   If the government-owned radio stations still do not wish to promote his song, “Ni Kali Lah”, the STAR Youth wing will be pleased to assist Clarence although his song has no connections to STAR.
Posted by sabahkini.net at 13:14