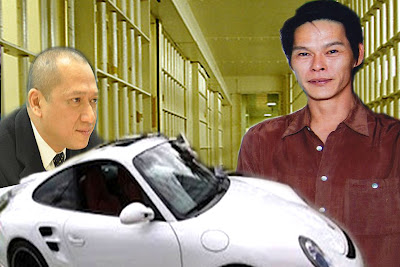 DENIED......Nazri denies receiving RM3 million from a timber tycoon 'friend' but is unsure if the latter lent his car to his son.

He was responding to Malaysia Today blogger Raja Petra Kamarudin (also known as RPK) who claimed that Nazri and his son Mohamad Nedim received RM3 million and a sports car respectively from Chia.

“Oh no, it’s not true, it’s not true. Chia is a friend. I don’t know if he lent the car to my son. You have to ask my son,” he told FMT in his office this afternoon.

Although he did not directly criticise Raja Petra over the claim, Nazri said that he had no problem with this matter being raised.

“RPK is a social person. He mixes a lot with people, so he probably gets information from them. Then by (Petra) writing this, it gives me the opportunity to give my side of the story,” he said.

Nazri also stressed that he had no influence over the Malaysian Anti-Corruption Commission (MACC) or the judiciary, adding that if he had, Chia’s case would have been dropped.

In a Malaysia Today report, Raja Petra claimed that Chia personally came to Parliament to hand RM3 million over to Nazri, after the latter allegedly resolved a matter relating to the RM40 million scandal.

He also claimed that Home Minister Hishammuddin Hussein and Attorney-General Abdul Gani-Patail were similarly involved.
Posted by sabahkini.net at 03:26