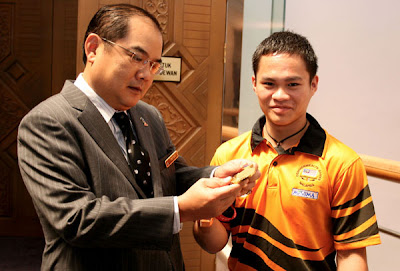 THE STATE has produced outstanding athletes who represented the country at the Olympics, Minister of Youth and Sports Peter Pang said at the State Assembly today.

These athletes include four in aquatic events, two in Tae Kwan Do, and six in athletics.

According to Pang, no Sabahan athletes were selected to represent the country at the recent London Olympics even though some had the potential.

“If weightlifter Aricco Jumith who won the gold medal at the Commonwealth Games did not face medical complications, I am confident that he would have been chosen to represent the country in the London Olympics,” he said.

Sabah has also produced noteworthy Paralympic athletes as three Sabahans were chosen to represent the country to the recent 15th Paralympic Games following the London Olympics. They include 2 athletes in the athletics field and one competing in the sailing.

Pang told the House that his ministry with the co-operation of the various state and national sports associations will continue to produce athletes who are capable of competing in national and international sporting competitions.

He said the state government has provided various incentives to attract youths to involve themselves in the training process once they have been selected to represent the state.

These incentives include the provision of monthly training allowances to elite athletes, the funding of athletes’ participation in national and international sporting competitions, providing opportunities for athletes to further their education in  private or public universities through the state government scholarship awards, and providing job opportunities as coaches and technical officers.

In terms of monthly allowances, elite athletes receive RM500 monthly while SEA Games gold medalists receive RM1500 per month. Sabahan athletes who qualify to compete at the Olympics will receive a monthly allowance of RM3500. - Insight Sabah
Posted by sabahkini.net at 00:41