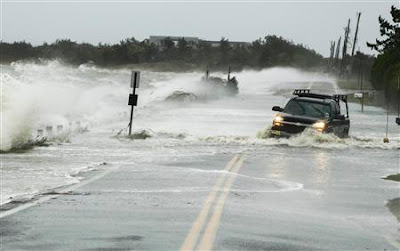 PUSHED.....A truck drives through water pushed over a road by Hurricane Sandy in Southampton, New York, October 29, 2012. Hurricane Sandy, the monster storm bearing down on the East Coast, strengthened on Monday after hundreds of thousands moved to higher ground, public transport shut down and the stock market suffered its first weather-related closure in 27 years.

By : DANIEL TROTTA AND TOM HALS

NEW YORK/REHOBOTH BEACH, Delaware (Reuters) - Hurricane Sandy began battering the U.S. East Coast on Monday with fierce winds and driving rain, as the monster storm shut down transportation, shuttered businesses and sent thousands scrambling for higher ground hours before the worst was due to strike.

About 50 million people from the Mid-Atlantic to Canada were in the path of the nearly 1,000-mile-wide (1,600-km-wide) storm, which forecasters said could be the largest to hit the mainland in U.S. history. It was expected to topple trees, damage buildings, cause power outages and trigger heavy flooding.

State governors warned of the acute danger from the winds and torrential rains. "There will undoubtedly be some deaths that are caused by the intensity of this storm, by the floods, by the tidal surge, by the waves. The more responsibly citizens act, the fewer people will die," Maryland Governor Martin O'Malley told reporters.

The U.S. stock market suffered its first weather-related closure in 27 years and many schools and businesses were closed in Washington, Baltimore, Philadelphia and New York.

While the center of the storm was not expected to make landfall until Monday night near Atlantic City, New Jersey, it was already creating dangerous conditions and forcing rescue workers into action.

Off North Carolina, the U.S. Coast Guard rescued 14 of the 16 crew members who abandoned the replica tall ship HMS Bounty, using helicopters to lift them from life rafts. The Coast Guard continued to search for the two missing crew members about 160 miles (260 km) from the eye of the storm.

The U.S. National Hurricane Center (NHC) said the Category 1 storm had strengthened as it turned toward the coast and was moving at 18 miles per hour (30 km per hour). It was expected to bring a "life-threatening storm surge," coastal hurricane winds and heavy snow in the Appalachian Mountains, the NHC said.

Forecasters said Sandy was a rare, hybrid "super storm" created by an Arctic jet stream wrapping itself around a tropical storm.

Nine U.S. states have declared a state of emergency.

With the election eight days away, President Barack Obama cancelled a campaign event in Florida on Monday in order to return to Washington and monitor the U.S. government's response to the storm.

"This is a serious and big storm," Obama said on Sunday after a briefing at the federal government's storm response center in Washington. "We don't yet know where it's going to hit, where we're going to see the biggest impacts.

While Sandy does not pack the punch of Hurricane Katrina, which devastated New Orleans in 2005, it could become more potent as it approaches the U.S. coast.

Several feet of water flooded streets in Rehoboth Beach, Delaware, which could be right in the target zone of the storm.

Local residents said police knocked on doors on Sunday, reminding everyone there was a mandatory evacuation. While the police took names, they allowed residents to stay at their own risk.

"If power goes that's a problem," said John Brunhammer, 40, a recruiter from Lewes, Delaware, who had come to see the waves crashing up to the dune line at Rehoboth Beach. "This area isn't known for prompt utility service."

New York and other cities and towns closed their transit systems and ordered mass evacuations from low-lying areas ahead of a storm surge that could reach as high as 11 feet (3.4 meters).

By early Monday, water was already topping the seawall in Manhattan's Battery Park City, one of the areas evacuated by Mayor Michael Bloomberg.

All U.S. stock markets will be closed on Monday and possibly Tuesday, the operator of the New York Stock Exchange said late on Sunday, reversing an earlier plan that would have kept electronic trading going on Monday.

The United Nations, Broadway theatres and New Jersey casinos were forced to close, and more than two-thirds of the East Coast's oil refining capacity was in the process of shutting down.

Officials ordered people in coastal towns and low-lying areas to evacuate, often telling them they would put emergency workers' lives at risk if they stayed.

The minimum central pressure - a key measure of a cyclone's strength - was recorded at 946 millibar overnight, matching the lowest pressure ever measured in the United States north of Cape Hatteras. The only previous time such a low measurement was recorded was in 1938, when the "Long Island Express" ripped up the coast, meteorologists said.

The storms could cause up to 12 inches (30 cm) of rain in some areas, as well as up to 3 feet (1 metre) of snowfall in the Appalachian Mountains from West Virginia to Kentucky.

Worried residents in the hurricane's path packed stores, searching for generators, flashlights, batteries, food and other supplies in anticipation of power outages. Nearly 284,000 residential properties valued at $88 billion are at risk for damage, risk analysts at CoreLogic said.

Utilities from the Carolinas to Maine reported late Sunday that a combined 14,000 customers were already without power.

The second-largest oil refinery on the East Coast, Phillips 66's 238,000 barrel per day (bpd) Bayway plant in Linden, New Jersey, was shutting down and three other plants cut output as the storm affected operations at two-thirds of the region's plants.

Oil prices slipped on Monday, with Brent near $109 a barrel.

While Sandy's 90 mph (150 kph) winds were not overwhelming for a hurricane, its exceptional size means the winds will last as long as two days.

"This is not a typical storm," Pennsylvania Governor Tom Corbett said. "It could very well be historic in nature and in scope." (Reuters)
Posted by sabahkini.net at 09:49