DAP’S ‘GESTURE OF GOODWILL’ TO SAPP 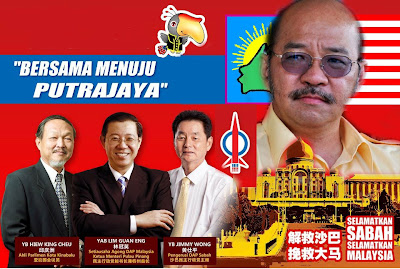 KOTA KINABALU: In a shrewd move to show it is willing to compromise to break the political deadlock in Sabah, the DAP said it will not be contesting all the Chinese majority seats in Sabah in the coming general election.

A senior DAP official speaking on condition of anonymity said the party had agreed to open the door to the Sabah Progressive Party (SAPP) to contest in three state seats, all within the Kota Kinabalu parliamentary constituency as a “gesture of cooperation and goodwill”.

“But that is about it,” he said yesterday. He was commenting on DAP Sabah chief, Jimmy Wong’s announcement last Sunday that the DAP would be contesting in three parliamentary seats and seven state seats in the general election.

According to the official, DAP would make way for SAPP in Api Api as they had heard that SAPP president Yong Teck Lee would be its candidate there, although there have been indications from the party that he might contest in his previous constituency of Likas.

Political observers say the clash between Yong and his archrival, BN’s Dr Yee Moh Chai, who is the incumbent state assemblyman for Api-Api, would be more worthy and satisfying for the former chief minister.

Yee is a Deputy Chief Minister representing the Chinese community under a peculiar system in the state’s Umno-led BN coalition government that breaks up existing power structures so as to prevent smaller power groups from linking up against Umno.

He is also the state’s Resource Development and Information Technology Minister and a deputy president of Parti Bersatu Sabah (PBS), a party that observers say has lost the goodwill of the Chinese community.

If Yong were to contest in Likas, he would be taking over from his close aide Liew Teck Chan and be open to being accused of practicing nepotism by his critics. As for Luyang and Likas which also come under Kota Kinabalu, the senior DAP official said it was only fair that SAPP be given the chance to defend the seats as they were the incumbents.

The DAP will defend its Kota Kinabalu parliamentary seat through incumbent MP Hiew King Cheu, an engineer, as well as field candidates in Sandakan and Penampang.

“We are still wary about SAPP as they refuse to officially join Pakatan Rakyat and as such it would be a big risk to us if they were to be allowed to contest more seats,” said the senior official, explaining the rationale in giving way to SAPP in three constituencies only.

‘SAPP’s strength is in Kota Kinabalu’

“Look, SAPP cannot even hold on to what they have and if they are given more and they win, we would never know until it’s too late if they would cross over again,” said the official.

“It is better to be safe. Furthermore, SAPP does not have calibre candidates for the Sandakan seats, so it’s no point contesting there. Their strength is in Kota Kinabalu so it is best they focus all their resources here.”

SAPP has claimed it has bases throughout the state and is capable of fielding candidates in a majority of the 60 state and 25 parliamentary constituencies.

DAP wants to field veterinarian Dr Edwin Bosi in the Kadazandusun-majority district of Penampang where PKR’s Darrel Leiking is also among the contenders. DAP is also eyeing the neighbouring constituency of Kepayan.

The party’s point man in the state, Jimmy Wong, who is the Sri Tanjong State Assembly told delegates at a DAP’s convention here last week that they had been allocated 10 seats in the state.

Wong said that initially they had sought 10 parliamentary seats and 20 state seats but after discussions with the other PR partners, they had agreed that the power equation had changed with the recent defection of BN MPs, Wilfred Bumburing and Lajim Ukin.

“We wish to make it clear to our delegates that DAP’s struggle is not about competing for seats, nor for personal interests or becoming election candidates. That is for opportunists. Our struggle is for the people’s best interest,” he said.

Heading off criticism by some within the party for not gaining more seats for local candidates, Wong stressed that DAP leaders must understand that in order to secure seats, they must first contribute to the party and prove they deserve to be nominated.

Noting the wealth and power of the ruling BN coalition and the difficulty in unseating it in the general election, Wong said the opposition could draw strength from the dissatisfaction of Sabahans in what they see as a pusillanimous state government taking orders from Kuala Lumpur.

“We are no longer focusing on the weaknesses and flaws of the BN. We have come out with our alternative State Budget 2013. Everyone is now talking about change, regardless of whether they are land-grab victims, unemployed youth or university graduates with low pay, underprivileged old folk, the homeless, or parents who are struggling to put food on the table and those who have problem to finance their children’s education,” Wong added.

He stressed that to ensure a better future for the people, DAP is determined to give Sabahans a viable choice that they never had in previous elections.(FMT)