NO GANGNAM FOR THE JAPANESE 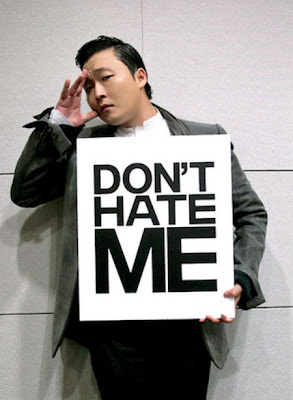 WHILE South Korean rapper Psy’s Gangnam Style has taken the world by storm, it has largely fallen flat in Japan. This is an anomaly viewed with grave suspicion by some in the singer’s home country.

Korean K-pop music is huge in Japan, but for one reason or another Japanese music fans have remained relatively immune to the seductive powers of Psy and his horse-riding dance.

In South Korea there has been speculation that a bitter territorial dispute over contested islands may have caused Japanese fans to shun the song. While the number has topped the UK charts and currently sits at number two on the US Billboard ranking, it has only scraped into the top 30 of the Japanese iTunes chart.

To make matters worse, various Japanese music blogs have suggested that the video’s success on YouTube - 530 million views and counting -was down to South Koreans using automated viewing programmes known as 'bots'.

Some even started playfully referring to the song as 'F5 Style' - a reference to the keyboard key used to refresh the window of an internet browser. On Monday the Korean Wave Research Institute (KWRI) - a non-profit body established in 2010 to 'aggressively' promote Korean popular culture around the globe - hit back.

Scepticism about the song’s worldwide popularity on YouTube “should be viewed as a primary school kid’s jealousy and envy”, Han said in a press release.Not content with defending the success of Gangnam Style, Han launched a vitriolic attack on the only Japanese entry in YouTube’s chart of the 30 all-time, most-viewed videos.

Currently ranked 29th with more than 237 million views, the video shows a young Japanese woman engaging in the popular Internet meme activity of dropping some mentos candy in a bottle of diet coke so that it sprays soda everywhere.

Mocking what he described as the "most grotesque and preposterous content" on the entire chart, Han said it was "another lowly example showing the video-related preference of the Japanese."

"Several reasons have been suggested for Gangnam Style’s" lack of success in Japan, including the fact that Psy didn’t follow the path chosen by most K-pop stars of releasing a Japanese-language version.

What do our readers think? Are the Japanese showing good taste? (Relaxnews)
Posted by sabahkini.net at 02:56