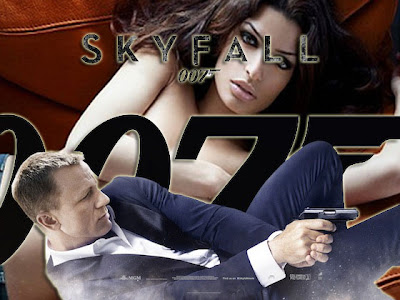 LONDON : 'Skyfall' has taken more in its opening weekend at the British box office than any previous James Bond film, its producers said on Monday.

Starring Daniel Craig as 007 for a third time, 'Skyfall' has made £20.1 million (RM98.5 million) in Britain and Ireland since opening in both countries on Friday, according to a statement on its website.

“We are absolutely overwhelmed with the reaction to Skyfall this weekend,” said producers Michael G. Wilson and Barbara Broccoli.

“It is particularly thrilling as the UK is home to James Bond and it being the 50th anniversary year.”

Critics have declared the 23rd Bond film, starring Spanish actor Javier Bardem as Bond’s latest nemesis, to be one of the finest in the suave British spy’s 50 years on the screen.

Directed by Oscar winner Sam Mendes, it opens with a spectacular chase scene in an Istanbul market but returns to home ground with a terror attack in London.

The Bond franchise is one of the most successful in history, with the 22 other films released so far taking more than US$5 billion (RM15.3 billion).

Bond was first transported from Ian Fleming’s novels to the silver screen in 1962 with “Dr No”, starring Sean Connery.

'Skyfall' screenwriter John Logan ('Gladiator', 'Lincoln') is already at work on the movie's two-part sequel, according to The Hollywood Reporter.

As 'Skyfall' rolls out worldwide, Logan is already working on the 24th and 25th chapters of the James Bond saga, both direct follow-ups to 'Skyfall'. The films will stray away from Ian Fleming's works, which was already the case with 'Quantum of Solace' and 'Skyfall'.

The plot is purposefully shrouded in mystery, but it has been confirmed that Daniel Craig will reprise his starring role in the sequels. Some of the characters that were brought back from James Bond lore for 'Skyfall', such as Q (Ben Wishaw), will also be woven into the plot.

According to The Daily Mail, the first part should start shooting in late next year.

Bond fans are currently flocking to theatres to watch 'Skyfall' (released on Friday in most European markets).

In the movie, the aging agent 007 tries to save M, whose safety is at stake following the loss of a hard drive containing the list of British secret agents currently on undercover missions.