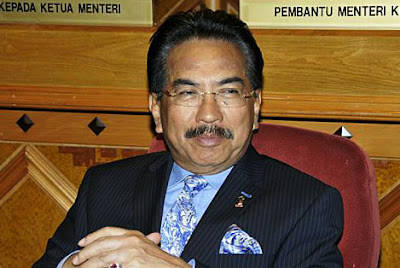 LARGEST.... Musa's concluding remarks to end the debate on Sabah's largest budget ever.

IN HIS SPEECH to wind up the debate on the 2013 budget Chief Minister Musa Aman, who is also Sabah's Minster of Finance, told the House that the state government had taken a dynamic approach in preparing the annual budget, taking great care to address the current situations and circumstances, especially those that affect the interest and welfare of the people, and it makes provisions on the strength of its own financial capability and federal allocations.

He told the House that the state revenues are steadily growing because there is an efficient management and collection machinery in place, mechanism that led to increased State revenue collection, as can be seen in 2007 when revenue soared to RM2.37 billion and reached RM3.3 billion in 2008.

Musa did not take kindly to opposition member from Sri Tanjung, Jimmy Wong's negative comments that the 2013 budget looked no different from the previous budgets.

"This is the view of people who can't see the difference between right and the wrong. This is typical of the opposition who refuse to look and listen and always deny the achievements of the government. They continue to tell the people that the Barisan Nasional (BN) Government is incompetent and incapable of doing anything right and does not struggle for the rakyat," he said.

Musa went on to repudiate Wong's claim that the State's Consolidated Fund had shrunk. He said Wong knew nothing about the basis of State Budget planning. Reminding the House that there is a price to pay for the development and prosperity of the State and people, he stressed that the Government was prepared to spend a large sum on development even though doing so will reduce the State Consolidated Fund.

"What is important is the State's financial reserve remains strong even though we increase expenditures," he said.

Taking a long-term perspective, the Chief Minister acknowledged that the state government must focus on revenues from investments in order not to rely too much on sales tax from crude palm oil and from oil royalties that together make up some 53.63 per cent of the state's total revenues annually.

Addressing a question from Luyang Assemblywoman Melanie Chia who asked if the State Government would be paying the RM544 million bond in one go upon its maturity in 2013, and run the risk of running into a cumulative deficit of RM804.48 million, Musa said the State Government would be able to provide sufficient funding when the bond becomes due in 2014, not 2013, he corrected Chia.

Explaining why the Chief Minister's Department has been allocated the highest allocation for next year, Musa said this is because his Department has to meet many expenditures, which include a RM203 million development fund for religious purposes, for the Assemblymen's "Sentuhan Kasih" funds, for Forestry and Lands and Survey Departments, and for the salaries and operations of the various departments under the CMD amounting to RM443.9 million.

Musa also touched on the large segment of the expenditure budget allocated to the Finance Ministry for distribution to the relevant departments to finance the programmes and projects for 2013.

According to him a total of RM960 million is set aside for trust share accounts, RM873.6 million for special fund projects under the oil palm industry, for repair of damages caused by natural disasters, to fund support infrastructure, for the construction and maintenance of government buildings, for grants to non-Muslim religious bodies and schools, for buying and maintenance of government vehicles, payment of State Government's debts, payment to the water concessionaires as well as equity investments.

The Chief Minister pointed out that all these large allocations appropriated for the Chief Minister's Department and Ministry of Finance are clearly explained in the 2013 Budget Booklet. He chided the Sri Tanjung representative for his "unhealthy accusations" and queries about these allocations.

"So the conclusion is that the Hon. member from Sri Tanjung did not read the 2013 State Budget booklet and did not even know the issues he raised," he said.

After a two-day debate the State Assembly passed the 2013 State Budget of RM4.088 billion, the highest in the State's budget history. 30 assemblymen were present for the vote count. (Insight Sabah)
Posted by sabahkini.net at 12:16